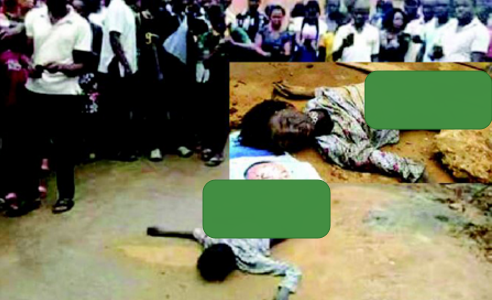 March 31, 2017 – More Details About The Bird Which Turned Into Witch Woman After Falling From An Electric Pole With Pastor’s Banner In Port Harcourt Rivers State

More details have emerged on the case of a bird which purportedly turned into a woman after it was electrocuted on a high tension wire.

The incident which happened around 8am yesterday at Agig Ada George junction turned the place into a tourist center.

An eyewitness said the bird fell down after pecking a high tension wire when electricity was restored.

The witness, Amadi said 10 other birds on the wire flew away when the electrocuted bird fell down.

Another source, who preferred anonymity, said the bird resembled a vulture, adding

“This witch has sucked people’s blood. It is God that did this miracle. The vulture was on top of the pole when power was restored. It was electrocuted and it died. When we heard the explosion, we turned and saw a bird. Suddenly it turned to a woman, a witch.”

The last witness said the power of God in the banner of a clergyman on top of the pole caused the miracle.

Video: White Couple Who Got Married In Ikoyi Lagos Danced To Nigerian Music To Entertain Guests
Kemi Olunloyo Sent Back To Prison As Police Prosecutors Seized Her After Judge Granted Her Bail