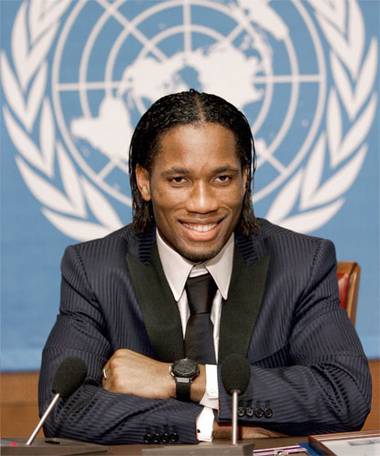 He may have lost a penalty kick that would have guaranteed his squad a victory in the just concluded African Cup of Nation (AFCON), but Ivory Coast Skipper and Chelsea FC striker Didier Drogba has other ways to put smile on the faces his countrymen than giving them a 2 year reign as African Champion. naijagists.com

The soccer star has taken on a responsibility to bring quality healthcare to his countrymen as a contributory effort of rebuilding his country after a post-election civil war that claimed over 3,000 lives.

Didier Drogba Foundation is set to build a world-class hospital in the nation’s capital worth £3million. Drogba is using all the money generated from his commercial activities with sports apparel companies like Nike, Pepsi and Samsung to fund the project.

An annual charity ball of his foundation will hold in March at The Dorchester hotel in London where he hopes to get his friends to support his dream.

“I am already excited. I can’t wait for this hospital to be built. But for the war it would have been open now. We are going to do it, we are going to work hard,” said the soccer star.