The master of corruption himself hiding under the umbrella of anti-corruption network, Hon. Dino Melaye has been arrested again.

The former House member was on Monday re-arrested at his office in Abuja two weeks after policemen arrested him at a protest held in Abuja to protest Nigeria’s aviation minister Stella Oduah’s ongoing N255m bullet proof cars scandal.

According to sources from Abuja, Dino Melaye was once again bundled from his office by Police officers with a warrant this morning.

Before his arrest today, his house had previously been searched for evidence.

He is likely to face charges of criminal intimidation and threat to life.

Below is a copy of Dino Melaye’s arrest warrant dated today November 4th, 2013 and signed by the Commissioner of Police. 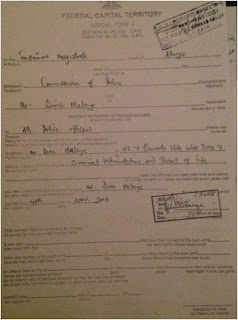