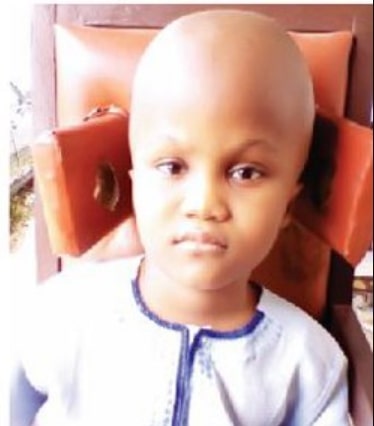 A trader identified as Isiaka Yusuf is in distress. One of his twin sons, Kehinde, 10, has water in his head and needs about N600,000 for urgent treatment.

According to the 54-year-old , the condition, known medically as Hydrocephalus, was a result of a doctor’s error, when Kehinde was a baby.

“We had taken him to a hospital on Peller Road in Isenyin, Oyo State as a six-month-old in March 2010 after he developed high temperature. The doctor, a senior official at Ado-Awaye General Hospital at the time, passed a drip via my son’s head. Though the temperature came down to normal, my son’s head soon started growing than his entire body a week after.

“When we went back to the doctor, he said they were on strike and that we should be giving him multivitamin syrup. We went to him after 20 bottles of multivitamins and no sign of improvement, but he said there was nothing he could do. He also refused to give us a referral letter. So we started taking him to different hospitals until we got to the tenth hospital – Awojobi Trado-Medical Hospital, Eruwa, Oyo State, where the owner gave us referral to University College Hospital Ibadan, where he went through two surgeries successfully.

“In all this, I have spent fortunes and have even had to sell off my properties to raise funds for his treatment. Even my wife, who is an auxiliary nurse, can no longer work because she needs to be by Kehinde’s side at all time. Apart from Kehinde’s inability to walk, he cannot sit and cannot control his neck. He also undergoes seizures without notice.

“His twin brother, Taiwo Abdulrauf is hale and hearty and is in Basic Six, about to resume in secondary school. The doctor at UCH had told us it may take eight years to manage the condition and that we’ll need a lot of patience and plenty money. So we had prepared our minds since June 2011, when we started the treatment. Our challenge now is that he has to embark on this last treatment to enable him sit and walk and we need N575,000 urgently.

“I am appealing to fellow Nigerians and corporate organisations to kindly come to our aid and help my son live a better life.”