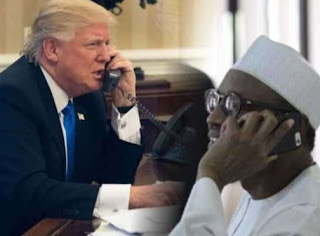 January 10, 2018 – Donald Trump And His Disparaging Remarks About Nigerian Immigrants Living In USA

I recently witnessed a heated debate on the report by the authoritative New York Times, which quoted President Donald Trump of USA as making disparaging remarks about Nigerian immigrants living in USA. The debate took place at the popular Staff Club of the University of Ibadan, that redoubtable intellectual citadel of the country.

Here I will like to say, that the club for years has been noted not only for relaxation but as a veritable spot on the campus for robust in-depth discussions of both current local and international affairs.

The authoritative newspaper reported that President Trump said that Nigerian immigrants after coming to USA would never return to ‘their huts’ and many of the discussants despite the denial of the report by the White Officials in Washington said many unprintable things about Trump for this reported unguarded statement.

A minority group among the discussants, while they showed disdain for Trump, felt that we should look beyond the insults by Trumps that abodes in Nigeria are huts. This group argued that we should rather focus on the reasons why young Nigerians and other youths from Africa now flock to other countries, which in some cases are poorer than their own countries in search of better life.

Personally I think Donald Trump with his worn-out slogan of making ‘America great again’, will eventually bring down his country. I have a feeling that the great global power and influence attained by the USA after Second World War would soon be a thing of history as a result of the misadventure and irrational policies of USA under Trump towards other countries of the world.

China is now poised to take over from USA as the greatest power in the world. In fact, the recent book titled Fire and Fury by Michael Wolff who studied the chaos in Trump’s White House for almost a year is convincing many people in USA that the mental state of President Trump is slipping. This is frightening and it is a pity that that the USA with all its might and greatness is under this unstable personality.

Since inception of mankind, migration of people from one place to another has always been an important human endeavour. We read in the Bible how Abraham was told in Genesis 12 to leave his country, his relatives and father’s house and go to Canaan.

Since that time we read stories of people moving from one place to another place. Recently Pope Francis told the world that in Judeo-Christian tradition, the history of Salvation is essentially the history of migration. Many reasons have been proffered to be responsible for migration of people. In recent times, religious, political and economic reasons are the main ingredients responsible for people to leave their God-given abode to go and settle in an alien abode.

The religious persecutions in Britain in the 17th century made the Puritans known as the Pilgrims to migrate to the new world now the USA. They were transported in the ship known as ‘Mayflower’ which sailed from Plymouth in England in 1620.

As for economic migration, we have many examples in history. The Irish potato famine known as the great famine or the great hunger which ravaged Ireland with mass starvation and diseases led many people in Ireland to migrate to USA between 1845 and 1849. This singular event was responsible for the present sizeable population of Irish descendants in USA.

The Jews, the Italians and other citizens of European countries also fled to the Americas as economic refugees. The founding of Australia started in 1788 when 11 British ships carried convicts to new colony of New South Wales. This movement was triggered off by economic problem in Britain at that time. Colonialism despite the gloss put on it by its perpetrators was geared to move people around for economic benefits of the people of the colonising power.

To me colonialism is nothing more than economic migration in disguise. Migrations as a result of political upheavals and wars are very common in human history. The two great world wars saw a lot of migrations of people all over the globe. During the Second World War, many Europeans fled Nazi Germany to Britain and USA in order to flee from Nazi atrocities. After the war, many of the Nazi supporters during the war fled and migrated to Latin America especially Argentina. Migration of people with attendant refugee problem as a result of many political upheavals in Africa is an intractable problem now facing United Nations Organization in many parts of Africa.

In its colourful history, USA has always welcome millions of migrants from other parts of the world especially from European countries. Apart from the blacks, who originally came to USA against their wishes in slave ships, other nationalities came to USA on their own to escape religious and political persecutions and to seek better life.

It is on record that the family of Trump’s mother originally came from Scotland. As written above, there is nothing wrong for people including Nigerians to migrate to other countries. What is troubling in case of Nigeria and other African countries is the alarming rate at which African youths who are the future of the continent are leaving in droves to other countries in search of the so-called green pastures.

Some of them, especially Nigerian youths both males and females, take horrendous risks to leave their countries. Presently, we are witnessing dehumanizing treatment given to our youths at the slave market in Libya and the untimely and needless death suffered by our youths in Mediterranean Sea.

Nigerians should not have been made to suffer this demeaning agony if our leaders present and past, had been less selfish and had vision to manage judiciously our God-given resources for the future generation.

In recent times, Lew Kew Yew did this for Singapore, and Mahathir Mohamad did the same thing for Malaysia. Nigeria should be an El Dorado for its citizens especially the youths because the country is well endowed. When most African countries attained independence in the 60s, there was hope for black people all over the world. Many black people outside the continent especially those in USA planned to come back to Africa so as to escape racism and discrimination which were their lots in the hand of the white people. Many of them wanted to revive the vision of Marcus Garvey who in the 20s advocated the movement of the black people from The Americas back to their roots in Africa. W. E. B. Du Bois, another black human right leader in USA relocated to Ghana when the country attained independence to live permanently.

The above dream of black people in diaspora evaporated because Africa did not live up to their expectations, as soon after independence, many African countries were wracked with political instability, economic dislocation, ethnic strife, religious warfare and other vices that had tied Africa down. African countries despite their endowments could not provide decent standard of living for the people.

Some of them became virtually bankrupt and depended on aids from other countries most of which are less endowed. The lofty dream at independence was replaced with nightmare and African youths now go for better lives outside the shores of the continent.

This prompted Henry Louis Gates Junior , the well-known African American historian to write that if slave ships are now brought back to Africa, many youths would willing enter the ships to go and serve as slaves in USA instead of staying in their countries which are nothing but hell to them.

The present economic situation in Africa is dire. It is pathetic and things have to change for better as we Africans cannot continue to waste the most vibrant segment of our population who are dying daily in their efforts to escape economic scourge in Africa.

It has to be said however, that Nigerian migrants despite the fact that most of them do not return home as Trump was quoted as saying, are making significant contributions to the development of USA because of the enabling environment which unfortunately is absent in Nigeria.

The pity is that no one can see any serious effort being made by our rulers to improve the enabling environment in the country so as to encourage our people in USA and other places to come home and replicate the good things they are doing in those places.