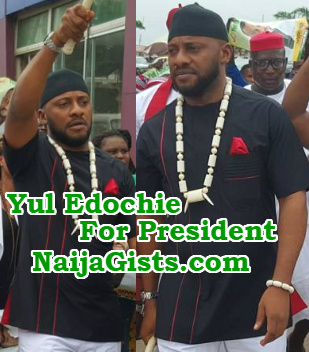 January 10, 2018 – Yul Edochie To Run For President In 2019 After Polling 145 Votes In The Last Anambra Governorship Election

The son of veteran Nollywood actor Pete Edochie has upgraded his vision sensor.

Yul Edochie who performed woefully at the last Gubernatorial election in Anambra state when he polled only 145 votes has hinted fans of his plan to run for the national office next year.

He made his intention known on his 36th birthday on Monday.

We hope the popular proverb “If wishes were horses, beggars would ride” is not the case here.

May be he should concentrate on his acting and movie making business.

If a man can pull only 145 votes at the state level, what gives him the assurance that he will do well at the national level??…

Oh well, anything can happen… We wish you well Oga!!