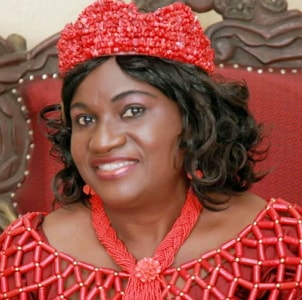 Don’t Let Your Negative Circumstances Determine Your Future. Create One For Yourself – Queen Of Brass Kingdom

Queen Josephine Diete-Spiff of Brass Kingdom today narrated how she escaped from the net of human traffickers trying to force her to travel to Europe for prostitution.

She said she rejected all their antics and resorted to doing menial jobs at dumping sites in Benin city to make ends meet.

The wife of the first Military Governor of old Rivers State, said:

“I had to carry blocks, cement and sand at a dumpsite to train myself in school.

“There is no justification for any girl child to go into drugs or travel to Europe for prostitution when they have the opportunity to be educated and achieve greatness through self-determination.

“I am very interested in this programme because it is a reflection of me. I grow up in Benin City where prostitution was very rampant in my days and I was almost drafted to be one of them but I said no.

“As a woman, you can do anything that will get you to where you are outside prostitution, outside drugs or traveling to abroad to go and get molested and treated as less human. I have a lot of friends then who went abroad (Italy). Today, they beg me for stipends.

“If people will learn how to read, you will be more advanced and you will be able to survive because life itself is full of troubles. So, there is no way you are going to escape it.

“Today, I am proud to know that I am a woman who God used to be who I am today because I gave God the opportunity.

“As a young woman even if you have made a mistake, don’t let your mistake stop you. Don’t let the circumstances you find yourself determine your future. Create one for yourself”.

The monarch’s wife, who is also the Chairperson of the State Traditional Rulers Wives Association and the Niger Delta Royal Queen Forum, spoke during a call on her by members of the Young Mothers Support Foundation (YMSF).

YMSF is an international non-governmental organization campaigning against teenage pregnancy and child molestation.

Continue Reading
You may also like...
Related Topics:brass, kingdom, queen