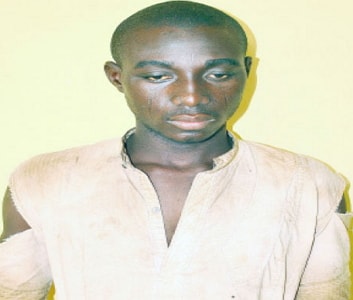 A young man identified as Aliyu Mohammed Yakutchi has been arrested for allegedly selling his 6-year-old brother, Yamusa Ibrahim to a ritual killer for N20,000.

In his confession at Niger State Police Command Headquarter in Minna, the suspect said he sold his brother out of desperation because he was under pressure to marry his fiancee Fatima.

The 19-year-old suspect said he sold Ibrahim to a buyer he identified as Legbo from Agaie LGA of Niger state.

Although he is yet to collect the money, he said the buyer promised to pay him after his little brother starts vomiting money.

When the buyer heard of police intervention, he allegedly fled his village to an unknown location.

Niger state Police spokesperson, Abubakar Muhammed said the command is on the trail of the fleeing ritual killer.

Here is what he told reporters today:

“Investigation by the police anti-human trafficking section at the State Criminals Investigation and Intelligence Department (SCIID) Minna revealed that on May 19, 2018, the said Aliyu Mohammad Yakuchi sold his six- year- old younger brother by name Yamusa Ibrahim Mohammed Yakuchi “m” of the same address for ritual purposes to one Legbo, “m” of Afuwagi village at the rate of N20,000.00 with an agreement that that he (the first suspect) will be paid if the victim started vomiting money.”