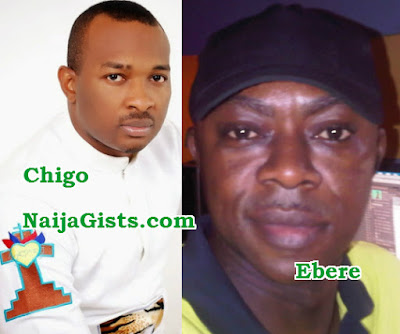 All hell broke loose recently at the University of Lagos during the filming of Hilarious Hilary Sitcom after some Igbo speaking Nollywood stars defied the order of the movie director, Reginald Ebere.

We learnt that Mr Ebere warned all the Nollywood stars to avoid speaking vernacular (langues order than English) on set in order to avoid backbiting and unnecessary gossip and the stars agreed but along the line, some of them got carried away.

Sources on set said, Chigozie Atuanya was the first actor who intentionally broke Reginald Ebere’s rule when he poked fun at a Benin actor on set in Igbo language.

The others who understood him reportedly laughed at the innocent Benin man who in turn reported them to the director.

This forced the director, Reginald Ebere to engage Chigozie Atunanya (who appeared very stubborn) in a shouting match.

It was a serious fight as they argued and was at the verge of exchanging blows when the producer of the movie, Kingsely Okereke, walked in and intervened.

The movie producer reportedly warned Chigozie to be professional or walk out. It was at this stage that calmness returned to the set.