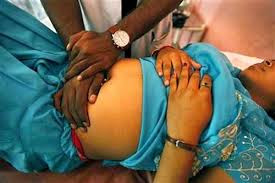 An herbalist, Morufu Ajah, on Tuesday admitted in an Igando Customary Court, Lagos, that he gave his wife Deborah money for abortion.

“I gave my wife money to abort her pregnancy because she used to leave home without my consent to unknown destination and come back after 21 days or 30 days.

“She may even tell me she was going to her parent’s place, after some days, I will call her parents, they will tell me they did not see her.
“So, when she came back home and told me that she was pregnant, I doubted it. I gave her N7,000 to terminate it.

“She collected the money, lied to me that she had done it but never did it,’’ Ajah said.
The petitioner said that his wife turned his mother into a `punching bag’ that most times, she beat and tore her clothes.

“My wife had turned my mother’s clothes to rags as she always tore it into pieces whenever she is beating her.
“She always curse and abuse my mother, calling her a witch and telling people that my mother always fly in the night,’’ he said.

He described his wife as a violent and aggressive woman that she used to hit him first any time they had misunderstanding and that always prompted him to beat her up.
Morufu alleged that his wife was fetish that on three occasions, he came back from work and saw salt sprinkled all over the house, reports the News Agency of Nigeria (NAN).

He urged the court to dissolve their three years old marriage because he was no longer in love and his mother’s life was in danger.

Deborah, 30, teacher, denied all the allegations, and insisted that the fight in the home was because she refused to terminate the pregnancy.

“My husband gave me money to abort my baby, I collected the money but used it for another thing.
“When he later discovered that I did not do the abortion, he started beating me and moved my belonging into the kitchen.
“He later left the house to unknown destination, it was my neighbours that always contributed money for me to feed till my delivery,’’ Deborah said.

The mother of two said that she never beat her mother-in-law nor tore her clothes.
She pleaded with the court not to grant her husband’s petition because she was still in love with him.

The court President, Mr Adegboyega Omilola, urged the couple to maintain the peace and adjourned the case till December 7, for judgement.