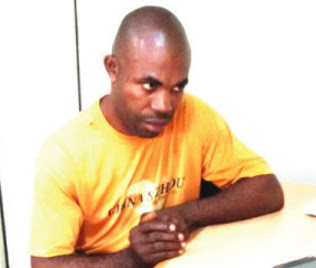 A married man has landed into trouble after he was arrested and charged to court for sexually assaulting a 14-year old girl in Lagos state, western Nigeria.

He was remanded in prison custody at Kirikiri, Lagos State western Nigeria.
The man Chinonso Amaraegbu allegedly lured and pushed the Priscilla Okpihwo into an empty room to have carnal knowledge of her.

The incident happened at 23 Kamoru street Ejigbo where Amaraegbu reside.

We gathered Amaraegbu saw the victim who was hawking second hand clothes and then acted like he was going to patronize her.

When the teenager went there, he pushed her into an empty room and brought out his penis and offered her money to have sex with her.

We learnt that the victim was overwhelmed by his action and fear, she started crying and shouting.
The wife of Amaraegbu who was inside came out and forced her husband to open the door, thereby securing released of the victim.

The neighbours who witnessed what happened contacted police at Ejigbo division and Amaraegbu was arrested and taken to the station.

During interrogation, Amaraegbu denied that he sexually assaulted the victim because he had not touched her before his wife came and rescued her.

He was charged to court with sexual assault under the criminal code and again he pleaded not guilty.
The presiding Magistrate, Mrs J.O.E Adeyemi granted him bail in the sum of N100,000 with two sureties in like sum.

He was remanded in prison custody pending when he will perfect his bail.
The matter was adjourned till 23 November 2015.