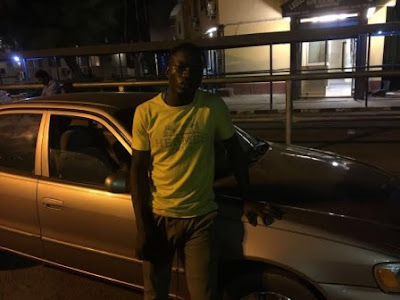 RRS officials have arrested a suspected car thief for duplicating his boss’s car key and for attempting to abscond with it.

The suspect, Emmanuel John, 26, was arrested at Abraham Adesanya Estate, Lekki on Sunday night for stealing his boss’s car after the day’s work with a plan to take the car, a Toyota Corolla, with registration number, Epe 642 DX to a Valentine party at a hotel in Sangotedo, Ajah.

John had cut the key of the car without the knowledge of her boss, Mrs. Flora Ighalo. On Sunday afternoon, when he was not supposed to be at work sneaked into the Abraham Adesanya Estate residence of his boss, and took away the car with his cut key.

According to John, “I and my friend, Oscar, want to carry the Toyota Corolla to a Hotel’s Valentine Show on Sunday night. I persuaded Madam to give the go ahead to cut a spare key but she declined.

A week before 14th February, I duplicated the key without her knowledge in Obalende.
“Even though, she excused me from work on Sundays, I sneaked into her resident and took away the car after church. I took the car to my residence in Ajuwe Area, Ajah, Lagos. My plan was that, after the Valentine show, it’s going to be stressful for me to leave the show around 3:00 a.m, go home and freshen up and set out for Abraham Adesanya Estate around 4:00 a.m. for the day’s work, with the car, it’s going to be easy for me to make it to work.”

“After driving the car round Ajah, I was on my way home at about around 8:00 p.m. when I saw Madam calling my set. She asked me where I was and I told her and she said I should come to her house that I was going to take her somewhere. I turned the car and I headed towards Abraham Adesanya Estate.

“I was at Abraham Adesanya Estate Roundabout trying to enter the Estate, when a man double crossed me and RRS officials arrested me. They asked me where I took the car to since morning and I explained everything to them. Madam has been very nice to me. She pays N35, 000 monthly salary. I am almost like her family member. I am always at ease with her and her family,” he explained.

On her part, Mrs Flora Ighalo, a tax consultant, said, “at about 8:20 p.m., I was seeing off my in-law and to my surprise, I discovered that my car, Toyota Saloon, EPE 642 DX, has been removed from the park.

“I immediately called few friends and one of them, got in touch with the operatives of RRS but it never occurred to me that my driver could take a vehicle I just brought from the church, with its key in my hand without my notice. Besides, he was not supposed to come to work on Sunday. Could he have come to my house without my consent and took away my car? The car has only one key. Where could he have gotten another key? she queried.

“I called him to ask him where he was and he told me that he was at home. I told him to come and pick me to somewhere, he said okay. He came and we saw the car with him”, she explained.