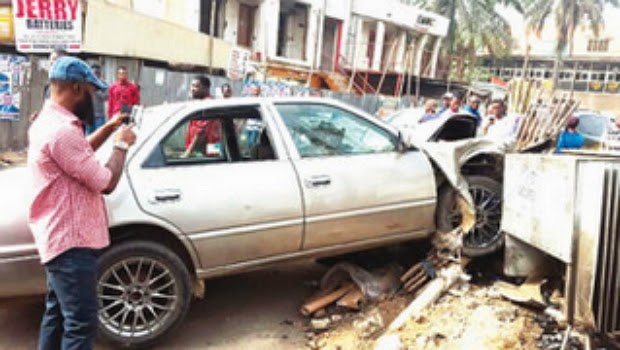 A boy and his grandmother lost their lives to a motor accident on Saturday after a driver knocked down the duo and a pregnant woman.

The accident happened on Oriyomi Street in Ikeja, Lagos State around 6am when the victims were returning from a vigil at the Celestial Church of Christ on Unity Street in the area.

PUNCH Metro gathered that the driver of the car, who was returning from a nightclub, rammed into the victims, dragged them to a junction in the area and smashed them against a transformer.

They were said to have been rushed to a private hospital where the boy and his grandmother were confirmed dead on arrival.

Our correspondent learnt the pregnant woman, whose leg was reportedly broken, had been responding to treatment at the Adefemi Hospital in Ikeja.

An eyewitness, Sunday Etim, said the driver took to his heels.

“The guys were about three inside the car, but they all fled except the owner. He has been handed over to the police. We learnt that the driver was drunk.”

When our correspondent visited the church around 12pm on Sunday, one of the clerics was making an announcement in respect of the incident.

The pastor, whose name was not given to our correspondent, said the pregnant woman’s husband was traumatised by the incident.

“He did not believe it. He was just laughing and speaking incoherently. This is a loss he never expected. No one expected such disaster. The lesson here is that we should all be God-fearing for we do not know when, where and how we will die. We pray to God to console the family and grant all of us longevity,” the pastor said.

A cleric, who identified himself simply as Prophet Segun, said, “They were our members, but they were not in church that fateful day. Actually, they came to church on Thursday. The accident did not happen here so it has nothing to do with the name of the church. The husband did not come today (Sunday) and we do not have anything to say.”

He said, “The owner of the car has been arrested and he is helping us to track down the driver. The pregnant woman is alive and responding to treatment. It is unfortunate that the boy and his grandmother died.”