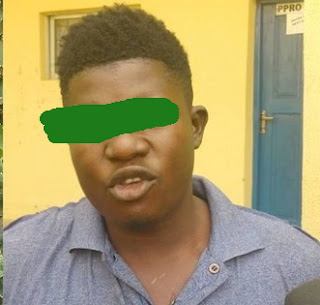 Police in Osun state have arrested a 29-year-old man identified as Kehinde Ariyo in Ilesha for allegedly raping an 85-year-old granny.

The suspect was said to be on the second round with the old woman when she collapsed.

He was said to have scaled the offence of the victim’s house and broken the door to commit the offence.

“The suspect, Kehinde Ariyo, gained access to the woman’s house at the Ogudu area of Ilesa, before forcing her to bed around 11 p.m.”

Adeoye, who said the incident happened last Friday, added that the victim sustained injuries in her genitals and other parts of her body.

“The aged victim lost consciousness during the alleged rape and was resuscitated at a hospital, where she was rushed to by neighbours.

“The woman passed out during the rape, but came back to life after some hours. The suspect was arrested the next day.

This is the height of wickedness in our society. The man injured the woman in the process, but she has been treated.”

Also, the suspect told reporters that he committed the offence.

“I only had two rounds with her and she did not faint. I was arrested the next day when I was woken up. Some people poured water on me when I was asleep, and I saw some policemen.

“What happened was that I stayed late at a party. On my way home, I decided to sleep over at Mama Kehinde’s place. I knocked and she opened the door for me. I explained to her that I couldn’t get home that night since it was around 11 p.m.

“Mama asked me to sleep on a couch in the passage. I was already drunk and did not know what happened afterwards.”