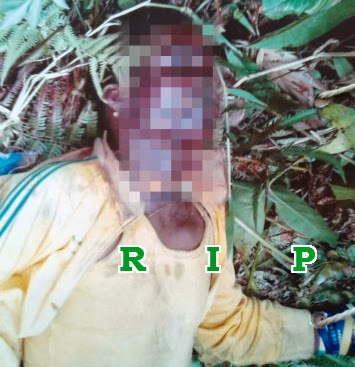 An unidentified sportsman was on his early morning jogging exercise on the 26th of February 2015 when some unknown criminals attacked him in Morogbo area of Badagry Lagos.

The victim was stabbed in the stomach and jaw and left for the dead in a bush near Igborosun village, a few minutes to a C&S church.

The pastor in charge of the church close to where the corpse was dumped, 50-year-old Pastor Stephen Hensu alerted Police from the Morogbo division.

This is what Hensu told Detectives about the victim:

“On the day of the incident, February 26, 2015 around 9am, I left my church for a meeting of the shepherds at Araromi.

“While I was there, I received a phone call from my wife informing me that some people coming from Igborosun village saw a corpse in a bush in our area.”

A police source involved in the case said:

“Looking at the corpse shows that the man was a sportsman and he was out jogging that morning when he was attacked and killed. “He was killed and his corpse dumped in the bush.

“He had deep cuts in his jaw and stomach. Nobody knows his name and none of his family members has come forward to identify him, which will help us in investigations.”

Efforts to contact the relatives of the victim were abortive as no one in the area could identify him.

His corpse had been deposited in a mortuary in the area.

Continue Reading
You may also like...
Related Topics:badagry, jogger, lagos