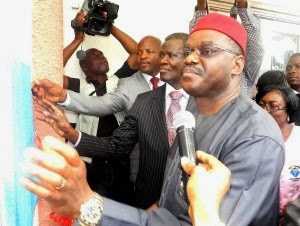 The latest victim of the killer virus is a doctor who treated a patient who just returned to Lagos from Port Harcourt. The doctor reportedly died last week Friday August 22nd, 2014.

Below is an official press statement released by Nigeria’s health minister, Onyebuchi Chukwu:

You will notice that the number of cases has increased from thirteen (13) to fifteen (15).

You will also notice that this additional two (2) were not treated in the isolation ward in Lagos. One of them is a primary contact of the index case (Mr. Patrick Sawyer). Even though presently he does not have EVD but further laboratory tests indicate that he had suffered EVD.

This primary contact of Mr. Sawyer’s evaded our surveillance team in the last week of July 2014 and travelled out of Lagos to Port Harcourt where, as we now understand, he consulted with a doctor and was apparently treated for some symptoms. After four days, following a manhunt for him, he returned to Lagos by which time he was found to be without symptoms.

This case would have been of no further interest since he had completed the 21 days of surveillance without any other issue, but for the fact that the doctor who treated him died last Friday, 22nd August, 2014.

Following the report of this death by the doctor’s widow the next day, the case had been thoroughly investigated and laboratory analysis showed that this doctor died from EVD.

As a result, several contacts have now been traced, registered and placed under surveillance. However, because the widow is now symptomatic, she has been quarantined pending the outcome of laboratory tests on her.

The total number of deaths from Ebola Virus Disease in Nigeria, therefore, is now six (6), the index case (Mr. Sawyer), the four (4) primary contacts that died in the isolation ward in Lagos, and a doctor that died in Port Harcourt whose blood sample tested positive after death. Also, seventy (70) persons have been placed under surveillance in Port Harcourt.

I want to charge the residents of Port Harcourt not to panic over this situation as the experience we have gathered from Lagos and Enugu respectively indicate that there is no cause for alarm when you have the government fully in control of the situation.
Once again we appeal to all contacts under surveillance to abide by the advice given to them by the Incident Management Committee.

With regard to Enugu, all secondary contacts will be followed up till tomorrow when they are all expected to be discharged from our surveillance.
Thank you.”