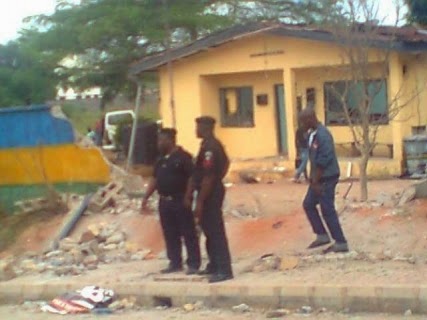 A man has lost his dear life to ignorance in Edo State.

Last night, a man simply identified as Nwachukwu was shot dead by robbers while he was trying to disarm them.

The incident occurred at Iguosa, in Ovia North East Local Government Local Government Area of Edo State, ‎when the robbers allegedly gained access into the man’s building when his wife went out at about 5:30 a.m. to fetch water.

The robbers were said to have ordered the woman inside and they started demanding for gold and other valuables.

A daughter of the victim who pleaded not to be named, confirmed that her father was killed while struggling to disarm one of the robbers.

“My mother opened the door to go and fetch water when the robbers followed her inside. They told my daddy to remove the gold on his neck but my father said it was not gold.

“My father ran inside and the robbers asked my mother to put on the light and when she did my father struggled to disarm a robber of his gun but the robbers shot my father,” she said.

His corpse has been taken to a nearby mortuary by the police.