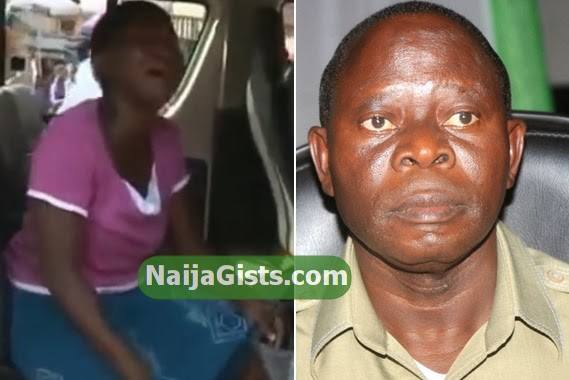 Days after the governor abused a poor widow for hawking illegally in Benin city, an endowment fund has been set up for the oppressed widow.

The woman in the video has been invited to PDP secretariat in Benin city to collect 250,000 naira in order to relieve her of pain.

Edo PDP watched with consternation Governor Adams Oshiomhole’s brutal, inhuman and merciless treatment of a widow street-trader whose wares he ordered seized and who he unfeelingly told to ‘…go and die’ even as she knelt down in fervent protestations and appeals to his pity on a helpless widow.

The governor’s actions are appalling, insensate, disgraceful, indecent, cruel and below board. It is clear that he does not care much about the well being of the people as he pretentiously avowed. Our hearts go to that hapless widow in this her time of travails and through her, to other widows who have been oppressed by the unfriendly policies of the administration in Edo State.

The PDP, Edo State will not let any Edo person ‘to go and die’ if it can help it, especially not hardworking people like that widow who are engaged in lawful enterprises that are, in themselves, not easy to carry on.

To this end, our party has instituted an endowment fund for all widows and oppressed people in the state and by this release, we invite the widow captured in the video of the encounter with Governor Oshiomhole to come to the PDP Secretariat on No. 70, Sapele Road, at 11am on Tuesday December 3, 2013 to receive a first-installment sum of N250,000.00 to cushion the pain, trauma and loss occasioned by her mistreatment and the seizure of the items she sells.

Governance is about the people and as a responsible National Institution, Edo PDP cannot be unconcerned about the wrong treatment of indigenes of the state to whom the present administration promised heaven just to win their votes. We will continue to stand in the gap to ensure that Edo people are deservedly fairly treatment

If Governor Oshiomhole believes that Edo People sinned by voting him into office, let him remember that he will account for his actions, if not to the people because he apparently does not think much of them, but to God Almighty in the short or long run.

We thank all those who have been humanely concerned about the plight of the widow and have stood out vehemently against the crying shame that was the insensitive action of a governor who seems bent on repaying electoral favor with ingratitude.

Attention all widows in Edo state, PDP is giving away free money……make u organize sharp sharp.