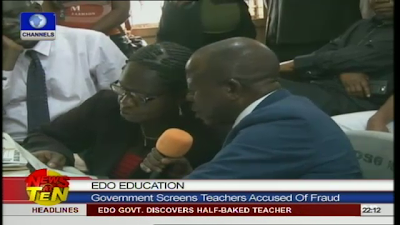 Mrs Augusta Odemwingie, a primary school teacher in Edo state got more than what she bargained for after Governor Adams Oshiomhole caught her unable to read her own age declaration affidavit.

She was among the few teachers who were told to read an age declaration affidavit yesterday and to everyone’s surprise, she stuttered non stop until Adams Oshiomhole came to her rescue.

When asked to repeat a sentence she just read, she asked “make I start am again” in pidgin English.

The Governor and witnesses were stunned yesterday for Mrs Augustia Odenwingie’s low intellect after teaching for over 20 years at Asalogun Primary School in Ikpoba Okha LGA of Edo state.

She was among thousands of teachers caught in age falsification fraud in the state.