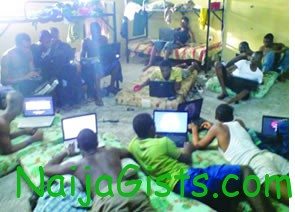 EFCC has arraigned two suspected Nigerian internet fraudsters, Olubode Olukotun and Olamide Adekeye on a 22-count charge bordering on obtaining money under false pretence, to the tune of $149,000 before Justice Akinteye, of the Oyo State High Court, Ibadan. naijagists.com

The accused persons were alleged to have obtained the sum from two American citizens, Janet Nelson and Louise Cecchni, in a romance scam.

When the charge was read to the accused persons, they pleaded not guilty.

The prosecution counsel, Kayode Oni asked the court to remand the accused persons in prison custody, while requesting for a date for the commencement of trial.

The defence counsel, Olaniyi, told the court that he had already filed a bail application since 1 April, and served the prosecution since 17 April.

However, Oni countered that it was against the law to file for bail when the accused had not been arraigned.

Olaniyi therefore pleaded that the accused be remanded in SSS custody.

Justice Akinteye adjourned the matter till 15 May and ordered that the accused be remanded in prison custody.

The accused persons were arrested on June 14, 2011 at Borem Inn, Ibadan by operatives of the Department of State Security, SSS and handed over to the EFCC on June 28, 2011.

He claimed to have met her through yahoo messenger where he saw her pictures.

He dated her using the false identity of a David Donovan, a successful American.

He successfully fleeced her of $90,000, which she sent to him in various installments through Western Union Money Transfer and also through GoldExPay.

From the proceeds of the crime he bought a Peugeot 407 saloon car for himself.

On his part, 28-year old Olubode, a fresh graduate of University of Ilorin, awaiting call up for National Service posed as Scott Ferguson, a Caucasian to fleece Louise Cecchni of the sum of $53,000 in various installments.

He obtained the money under the guise of a short loan facility, with a promise to refund his internet lover.

Both signed a promissory note to that effect and she started wiring him the hard currency through a GoldExPay account he maintained with Liberty Reserve.

From the proceeds of the heist, Olubode bought for himself an Infinity M35X 2007 model saloon car for N4.4 million.