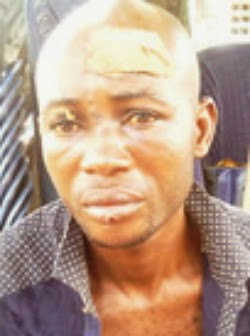 Pictured above is Nnakaeye Eze, a barber who recently escaped death at his shop in Isolo area of Lagos.

Eze said he was attacked at his shop on Olawale Street in Ire Akari Estate by some suspected members of Aiye cult group because he was dating the wife of Darlington, a cult member.

Eze said 11 cultists stormed his shop with axes and knives around 10:30pm on Friday last week to attack him but he escaped from them.

“The cultists stormed into my shop at about 10.30pm, and started hitting me with their weapons. They came with two of their leaders, one Darlington and Big 7. The man, Darlington, accused me of dating his wife.

“It is not true that I dated his wife. I am also married with one child. They did not only injure me, they also vandalised my shop, stealing my wallet which contained N21,000.”

The 35-year-old Barber said he has reported the case at the Okota Police Division.

“I Have Sex With Dogs For Spiritual Powers”- Armed Robber From Benin Republic Confesses
“No African Man Has One Wife”- Sunny Ade, KSA’s American Wife Argues