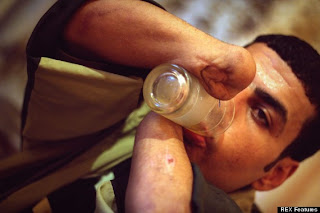 Sept 14, 2013 – Egyptian Man Cuts Off His Own Hands To Stop Stealing Addiction

In what sources called self-imposed Sharia Law, an Egyptian man, a popular stealing addict has chopped off both of his hands in a bid to stop his addictive stealing habit.

28-year-old Ali Afifi lost his first hand in 2008 by holding it under the wheels of a fast-moving train.

Afifi, who posed for the above picture few weeks ago reportedly asked an Imam to cut off his second hand because he couldn’t stop stealing.

Afifi said: “But the Sheikh refused my request, saying he is not a ruler or in a decision-making position to take such a decision… he advised me to repent and seek God’s help… I then decided to cut my hands off.”

Will this decision ever stop him from stealing?