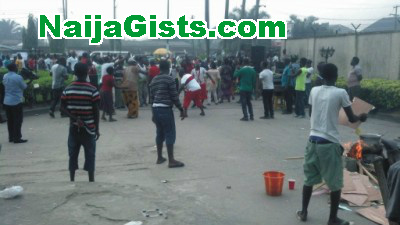 A man identified as Endurance Augustine, lost his life while several others were injured in a renewed crisis between two opposing rival factions operating at Izeagwu and Kehinde Streets in the Ajegunle area of Lagos at the weekend.

The injured persons are said to be battling for their lives in a hospital in the state.
According to reports, problem ensued in the area over power tussle between members of the Eiye confraternity.

Although the policemen from Ajeromi Division responded to the distress call and arrested two members of the cult groups, the rampaging gang had unleashed mayhem in the area before they arrived.

The arrival of the police reportedly averted more casualties as the warring group fled.
Confirming the arrest, SP Dolapo Badmos, the State Police Public Relations Officer, said efforts are on to apprehend the other fleeing cult members.

She said, “The command received a distress call that some rival cult groups of Kehinde and Izeagwu streets in Ajegunle, were engaging themselves in a street fight.

“The command’s operatives from Ajegunle mobilised to the scene and on sighting the police, they took to their heels.
“However, one Endurance Augustine, aged 18-years, was discovered dead. His corpse has been removed and deposited at Ajeromi General Hospital morgue for autopsy.

“Meanwhile, two suspects were arrested on the spot, while effort is on to apprehend other fleeing suspects.”