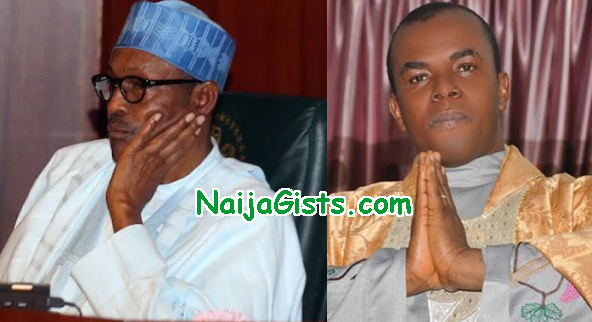 Enugu based Catholic Priest Reverend Fr. Ejike Mbaka has called for prayers for President Muhammadu Buhari and has absolved him of blame in the country’s economic challenges.

Mbaka, however, reassured Nigerians that the current economic condition in the country will soon be over.

In a sermon to mark the opening of the 2016/2017 Legal Year, organised by Enugu State Judiciary, Mbaka who prophesied Buhari’s victory in the 2015 presidential election recalled that, in 2012, he prophesied that doom time would follow the oil boom, if there was no good planning of the country’s resources.

“But, the past administration was one of ‘loot as much as you can.’ Look at a place like the Niger Delta and one of them became president and did nothing for his people and now, you want Buhari to perform magic.

But, we are a mono economy and every country depending on oil is suffering the same fate with Nigeria today.

“The tap root of Nigeria’s economy has been cut; Buhari is just trying to hold a rolling vehicle; a vehicle that the brakes have been destroyed.

“So, Buhari is not the cause. If (former President Goodluck) Jonathan was the president today, the situation would have been worse.

“Economic recession will not last long; the solution will come in a super natural way.
“Just like Ebola, we thought everybody would die; where is it now? Recession will go as Ebola has gone.

So, all we have to do is to pray for Buhari; he has good agenda but, many around him are planning to pull him down.”