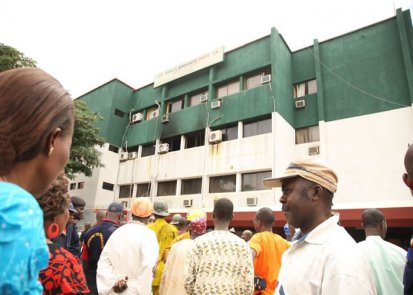 Unknown assassins believed to be objected to the declaration and choice of the Peoples Democratic Party (PDP) candidates, Mr Ayodele Fayose for the June 21 governorship election in Ekiti State has sent the Party’s secretariat into flames.

A source in the state capital told Sahara Reporters this afternoon that the Secretariat of the Peoples Democratic Party (PDP) ocated along Ajilosun, Ikere-Akure road in Ado Ekiti, was in flames at mid-day causing panic amongst residents living close to the four story building.

This is coming four days after the controversial primary election of the party produced a former governor of the state, Ayo Fayose also known as ‘Osokomole’ amidst protest.

Many sources who spoke to Sahara Reporters revealed no clue to the cause of the fire yet but security has since been beefed up around the vicinity of the building.

A trader had narrated the incident to Sahara Reporters that residents close to the area raised an alarm when they sighted the mysterious fire which later attracted the fire service to put it out.

As at the time of publishing this report, no official of the party agreed to comment on the development instead they referred Sahara Reporters to the Police for comment.

It was gathered that the assassins gained access to the building and forcibly entered the chairman’s office which they set on fire thereby setting it on fire.

Various party document and files were said to have been consumed by the inferno.

Stern-looking armed policemen have cordoned off the area with no one commenting on the incident.

Two journalists, one of them working with the Broadcasting Service of Ekiti State (BSES) were attacked immediately as they mounted their cameras to take some shots of the scene.

The two journalists were said to have been beating point-black but for the timely intervention of securities they were saved from being unleashed.

When Sahara Reporters contacted the Spokesman of the Ekiti State Command of the Nigeria Police Force, Mr. Victor Babayemi, said no arrest had been made but the police had commenced investigation into the incident.

” The case has just been officially reported to the police. Some of our officers who quickly responded to frantic calls from neighbors at the scene saved the life of two journalists who would be unleashed by the people. I can assure you that this people will be brought to book as we have commenced investigation into the matter” Babayemi told Sahara Reporters.

Some state executives of the party were said to have reported the case to their National headquarters in Abuja while they are also making frantic calls to other members outside the state to report the incident.