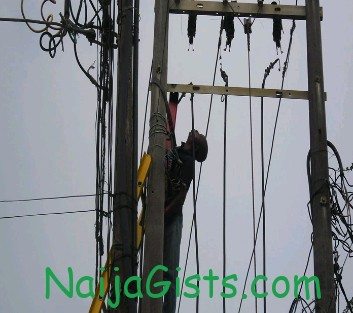 A man whose identity is still unknown was on Tuesday electrocuted while vandalising electric cable at the Oji River Water Scheme in Enugu State. naijagists.com

The Managing Director of the state water corporation, Mr O’Brien Ofordu, said that the suspect was discovered when the corporation was monitoring ongoing repairs at the power station.

“Last week, we carried out repairs on the line vandalised by hoodlums. They cut all the 240mm upriser cable that delivers power from Oji to Enugu.

“It took us one week to repair and relay the lines last Saturday and on Sunday around 10 p.m., the line tripped and we reported to PHCN.

“We traced the line and found the dead body inside a trench,’’ he said.

Ofordu said the body of the suspect had been deposited at the General Hospital in Oji while the police had commenced investigation to identify the suspect and his collaborators.

The managing director said that a motorcycle and a saw as well as some cables were found at the scene of the incident.

He said the corporation had commenced plans to ensure the security of the power station which is also the major source of water supply to the state capital.

Ofordu said the corporation would employ the services of vigilance groups and supply its men with motorcycles and guns to guard power stations.

He said that the vigilante would be registered and would undergo training by the police.

“Vandalism has been the major problem hindering the water project in the state. We will do everything possible to stop the activities of vandals in the state,’’ he said and appealed to the public to report suspicious activities in their areas.(pm reporter)