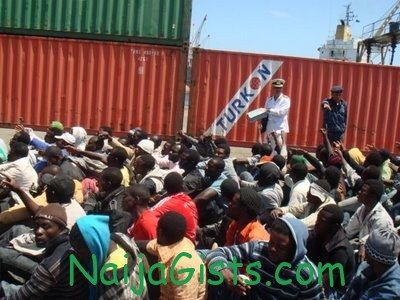 Immigration authorities in Israel have started a massive deportation of Africans comprising mainly Nigerians in what they termed ‘operation clean up’. naijagists.com

In the last few weeks no fewer than 50 Nigerians have been deported from the middle east country for reasons ranging from what they termed illegal stay, work permit and other flimsy excuses.

Due to the recent series of offensive and racist statements made by Israeli politicians, African diplomats in Israel are afraid to walk down the street, said African ambassadors in Israel during a meeting with Deputy Foreign Minister Danny Ayalon.

The meeting, which was attended by the ambassadors of Angola, Ghana, Nigeria, Kenya, Ethiopia and the Ivory Coast, was recently held in the Foreign Ministry’s offices in Jerusalem, Yedioth Ahronoth, an Israeli newspaper reported.This was after the wife of the Ghanian ambassador was arrested by Israeli police where she was on shopping in Tel Aviv.

Israeli’s claim that  immigrants are  responsible for the  ongoing series of rapes and muggings committed in their country is a way of calling a dog a bad name in order to hang it.

Reports from Tel Aviv where most of the immigrants live show that most of them now hide inside their apartments without going to work for fear of being arrested while on the street. ’Many Nigerians living  in Israel are very law abiding and go  their  normal businesses’ said an official of the Nigerian community who doesn’t want his name in print.

The recent crackdown has seen Israeli authorities arresting Nigerians with families and taking them to detention camps sometimes with their very under aged children where they face harsh punitive measures and untold hardship before being deported to their country.

To worsen the situation, the Nigerian Embassy officials have never intervened in this ugly incidents being meted on Nigerians, our source revealed

Mr Iweka [real name withheld] from Enugu state  said he has been living in Israel legally since  twelve years working in a restaurant but was deported on the orders of his employer who wouldn’t want to pay his accumulated gratuity. He was arrested in his apartment by over twenty security agents and chained both legs and hands and bundled into a van even after showing them his valid papers and driven to prison. His lawyer took his case to court and after spending two months in the prison under harsh conditions was deported without concluding his case. He described is ordeal as a racist, barbaric and inhuman.

Member of the Israeli Knesset Shlomo Molla (Kadima) has  warned that, “The State has failed to do its diplomatic due diligence .No one wants to migrate here if they’re doing well… It doesn’t mean that we shouldn’t try to send them back, but these events – abusing them like that – that’s wrong.

“I’ve seen case where people where physically hurt. If that’s not incitement – what is?” he wondered.

Member if Israeli Knesset K Dov Khenin (Hadash) read testimonies given by teens suspected of assaulting migrants, detailing the violent abuse they had perpetrated. He further deplored the government’s actions against them.(vanguardngr)