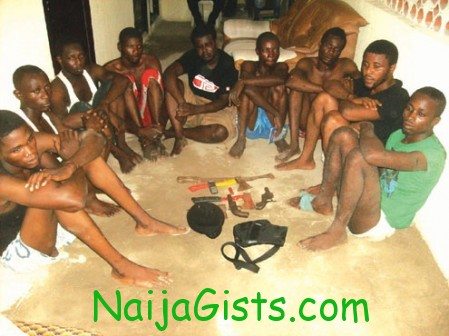 They were nabbed at Ijanikin, a suburb of Lagos along Lagos/Badagry Expressway, Lagos State, Southwest Nigeria.

A police source told reporters that two members of Eiye Confraternity had hired a commercial motorcyclist (okada rider) to take them to Ijanikin where they shot a rival cultist, a member of Aiye Confraternity.

The okada rider, after the shooting, contacted SARS operatives who arrested the suspect’s accomplice identified as Wasiu.

According to PM news, the cultist, who fired the shot managed to escape, but Wasiu led policemen to the hideout of the cultists at Ijanikin, where other cult members were arrested, the police source revealed.

According to the source, items recovered from the suspected cultists include three locally made cut to size rifles, one black bag, one locally made pistol, one live cartridge, four axes, one cutlass, one black beret and one phone.

Another member of the cult group, Udemeobong from Cross River State, said he is a 200 level student at LASU. He confessed to the police that he was initiated into the cult last year when he visited his friend in Benin City, Edo State.

Police sources told reporters this morning that the suspected cultists will soon be arraigned in court on charges of attempted murder.

Meanwhile, the victim who was shot by the suspects is still lying critically ill in an undisclosed hospital.

He was said to be having a swollen stomach perhaps caused by bullets lodged in his belly.

When we called the Public Relations Officer, of LASU students’ union, Teju Azeez, this morning, he disowned the suspects, saying “they are not LASU students.”