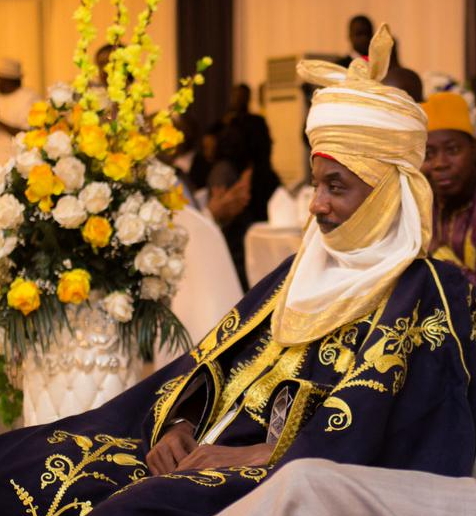 Official statement released by Sanusi yesterday after critics accused her of marrying an underage Princess.

“I am sure NC members all have their views and have kept quiet out of (appropriate) deference to our right to make our individual choice. Obviously I do not need to explain anything to anyone in a purely personal matter but a few points are worthy of note:

1. The lady in question is 18 and therefore legally of age to marry under all laws and certainly under Muslim law.
2. She is proceeding for her undergraduate education in the UK in January. She had an A
in computer science in her O levels and plans to get a degree in computer science.

3. Each and every one of my wives is a university graduate and some have worked and then stopped and in each case the choice was purely theirs.
4. It is a tradition in Kano that emirs and princes in choosing wives consider issues beyond the individual. The family is in every sense a social unit. My predecessor was married to princesses from Ilorin, Katsina and Sokoto.
5. The relationship between the late Lamido of Adamawa Aliyu Musdafa the father of the current Lamido is well known. Lamido Aliyu was the first emir turbaned after emir Sanusi I and they remained close until Sanusi’s death.
6. My own relationship with the current Lamido dates back to 1981 when he was Ciroma and commissioner for works. By the way the Lamido and I are not illiterates we know what we are doing and he does have a PhD in Engineering.
7. My own mother was married in Adamawa and lived there for more than two decades and I have eight younger brothers and sisters from there.
8. It is therefore natural that if I choose to marry from another kingdom Adamawa would be the first choice for me and I am extremely happy to strengthen these long historical bonds.
The young lady in question gave her free consent and even after the contract, the wedding will not happen for a few years. By then she may be 21. If she freely consents to this I do not know on what moral grounds anyone has a grouse. She is an adult, she gave her consent, and her education is not being in anyway interrupted.
The real issue is that people do not accept cultural difference. And you can see it in the approach to these issues. I am supposed to be urbane and western educated. Yes but I am not European. I am a northern Nigerian Fulani Muslim brought up in a setting exactly like the one my children are being brought up in.
If you read this and it improves your understanding of this issue that is fine. If it does not just remember it is not your life, it is not your daughter and you are not my wife therefore it is not your business.
I obviously cannot stoop to the level of responding publicly to these kinds of articles. I have always been an advocate of girls marrying after maturing. I personally like the minimum age of 18 even though I understand those who say 16 is fine and indeed this is the law in most so called advanced countries.
Is this something that I expect a European or western trained or feminist mind to appreciate or endorse? Not at all. But has any American been bothered about my views on men marrying men or women marrying women who frankly I find primitive and bestial? No and my views do not matter. These are cultural issues.
Even in Nigeria I have heard all this stuff as in Pius article about “north” and northerners. Again it is a failure to respect difference. There are parts of this country where parents expect their daughters to live with their boyfriends for years and actually get pregnant before they marry. It has become culture. We do not have that in the north and if your daughter gets pregnant before marriage she brings nothing but shame to the name. But we do not issue condemnations. We agree that this is how they choose to live. And I can give many other examples.
When people use the term libido they do themselves injustice. First of all it shows how they view women and marriage. Women are nothing but the object of sexual desire. Marriage is nothing but sexual gratification. Well I am sorry but in my tradition it is not. Beauty and attraction rank third after religion and lineage in the choice of a wife.

They see an 18 year old young lady. I see a princess of noble birth whose mother is also a princess, and who has been brought up in a good Muslim home. This is the kind of woman that is prepared for giving birth to princes and bringing them up for the role expected of them in society.

Marriage is both social and political. Expanding the links of Kano which have already been established by my predecessors through inter-marriage with Katsina, Sokoto, Ilorin, Katagum, Ningi, Bauchi etc to Adamawa is an important and significant step and this is obvious to anyone with a sense of how royal families work and

Ibn Khaldun’s sociological concept of Asabiyyah.
When the Emir of Kano marries it has to be something beyond what he personally desires to what is appropriate for that position and the expectations of the people he represents. You don’t just pick up any girl on the street.

And by the way, for those who shout libido, sex is cheap and available everywhere in all shapes and sizes and all colours if that is what they want. And all ages too. Marriage is a very different proposition. The mother of your children has to be something other than, not at least much more than a mere object of sexual fantasy. But if you do not know that you need to buy yourself a brain.

I have daughters. And they know they can only marry from certain backgrounds. I always prefer family. When my daughter wanted to marry Mouftah Baba Ahmed’s son and she asked me, knowing my views on family, I told her Mouftah is family. And this is not about me and Mouftah or me an Hakeem or Nafiu. No. It goes back to Baba Ahmed and Emirs Sanusi and Bayero. And the same rule applies to my sons. And it applied to me as well.

It is, I am sure, very strange that I should even bother to comment on this. But it would be hypocritical for me to just keep quiet so long as these things are being posted and commented upon explicitly or in a snide manner. There was no secrecy in the marriage fatiha. The date was fixed and it was to be done in the central mosque after Friday prayers.

The day before we had a tragedy in Saudi Arabia and decided the fatiha must be very low key as a mark of respect for the dead. All traditional rulers in Adamawa were there, as were governors and commissioners, members of my own emirate council and Adamawa people. There is nothing here to hide or be apologetic about.

The emirs of Adamawa have shown love to my parents and grandparents and it is a sign of my appreciation of their love that i marry their daughter. This is the highest statement of friendship and loyalty on both sides.

Again if you understand this this is fine. If you do not, buy yourself a brain, A la Pius.

In any event this is my one and final and only comment on this. And I am making it out of respect for NC members.”