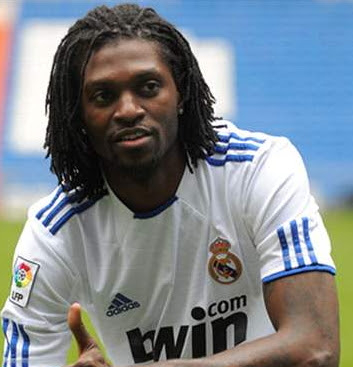 Footballer Emmanuel Adebayor believes he could have sealed a permanent switch to Real Madrid in the summer of 2011 were it not for a letter penned by his late brother to the Spanish club.

But Madrid refused to take up an option to buy him that summer, and after being omitted from City’s pre-season tour of the United States, he was loaned to Tottenham.

In 2015, Adebayor posted on social media about his personal problems with his family, revealing the financial burden of supporting them during a lengthy Facebook statement.

Two years on from that episode, the now Istanbul Basaksehir striker – who insists he ‘sees life in a different way’ – has revisited the controversy which brought the end of his time at the Santiago Bernabeu.

Adebayor, who has made an encouraging start at his current club with six goals in nine league appearances, says he did the right thing in going public on his inner turmoil – and the 33-year-old has disclosed more on his family affecting his career.

In an interview with the BBC this week, he said: ‘It’s a tough one.

It’s a difficult one. Today, I think I made the right decision to go public because of what I have been through.

‘People will say yes, you have to keep it for yourself. I had done everything to stay in Real Madrid but because of my late brother I couldn’t stay there.

‘He sent a letter, an official letter from Adebayor’s family to the club [saying] that they should not keep me.

Adebayor admits he still does not have a good relationship with his family, claiming that they never get in touch with him if he sustains an injury but only to ask for money.

The former Tottenham striker is back enjoying his football, however, having been a free agent following his unsuccessful spell at Crystal Palace in the second half of the 2015-16 season.

Adebayor has a contract with Basaksehir until the end of the season, and the former Togo captain’s blistering start in Turkey suggests there is plenty of life left in the outspoken striker yet.