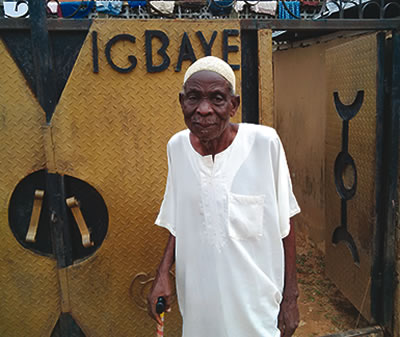 The family crisis tearing apart Emmanuel Adebayor’s family has turned out to be a source of sadness for the Tottenham Hotspur player’s relations and kinsmen in Igbaye, Odo Otin Local Government Area of Osun State. The kinsmen in Adebayor’s hometown spoke to our correspondent on the burning issue.

A visit to the sleepy town by our correspondent revealed that the youths and some elderly persons, who are football fans in the town, are not oblivious of the quarrel tearing the family apart.

The footballer’s late father, Shadrach Adebayo Adeyi, hailed from Eesa compound, one of the largest families in Igbaye.

Residents of the town said they were up to date with the family’s misunderstanding on Facebook, expressing dismay at the manner in which it had gone public.

The famous footballer had reportedly accused his mother of witchcraft and claimed his siblings had wanted his downfall on Facebook despite helping them. His brothers and sister had also fired back through various media, slamming him for selfishness and neglect.

Relations said Emmanuel and his siblings were born and raised in Togo after their father left Ghana, when former Ghana President Jerry Rawlings drove illegal Nigerian immigrants out of the country. They said Shadrach chose to settle in Togo rather than return to Nigeria.

Shadrach, according to them, married a young lady from Ekusa, a community not far from Igbaye.

Shadrach died few years back and was buried in Togo.

The couple raised their family in Togo and Emmanuel rose to stardom, but they said the recent daily postings on Facebook by the Tottenham player had become an issue of concern to them.

The head of the Eesa family, Pa Nathaniel Okunlola, told our correspondent that he and other members of the family wanted the siblings to reunite and move on with their lives.

Okunlola, who estimated his age to be around 103, said the player’s father died some years back and was buried in Togo. He said the family had cut their ties with their kinsmen in Igbaye but added that he would love to see them re-unite and return home.

Another elderly person in the family, Pa Ahmed Oyetayo, who is second in rank to the monarch of the town, said he was disturbed by the news of quarrels which had turned the family members to sworn enemies.

He said, “We are not happy about the development and we are appealing to them to stop the show of shame. I am sure their father, Shadrach, will not be happy in his grave. It is disturbing when siblings engage in this kind of dirty fight.

“There is no family where there are no issues but such issues are not made public. I believe it is the handiwork of the devil. The devil will always want to cause division where there is unity and they just have to realise this and forgive one another. They can still come together and forget the past.

“We do not know how their quarrel started and we won’t apportion blames but we are using this medium to reach out to them to stop this fight.

One of Adebayor’s cousins, John Odesola, who is now residing at Igbaye, said he was not happy with the development among his cousins and their mother. He attributed the rift to the devil, who he said would always want to cause disaffection in any peaceful relationship. But he added that the crisis was not beyond what they could settle amicably.

Odesola said, “The crisis among the siblings is disturbing. If I could, I would visit them to see how the crisis could be solved. I will like to advise them to stop the fight, and I want to beg them to put an end to the daily accusations which is just like washing their dirty linen in the public.

“There is bound to be misunderstanding even between husband and wife but making it public is not a solution to such. My brothers should think twice and discontinue their quarrel.”

Some residents concurred with Adebayor’s relations, calling on the warring siblings to end their quarrels and live peacefully together again.

Some of the residents, who said they had been following the ‘Internet war’, also blamed the devil for the crisis. But they said the mother should intensify her prayers to regain the trust of her son, who labelled her a witch.

However, some of the residents differed on the personality of Adebayor’s mother. While some said the mother might have caused the crisis by supporting one of the children against another, those who claimed that the mother was the cause of the crisis failed to provide any proof to sustain their claim.

However, a resident, who identified himself as Kunle, said he believed the story as it was told by Adebayor. But he would want the family members to end the rift.

Kunle said he believed that the family problem contributed to the loss in form, which the player struggled to cope with in the just ended season.

He said, “I think their mum knows something about the family crisis. They said she is a witch but it may be so or she may be doing something to make them believe that she is fetish. But Adebayor should beg her because the woman is his mother. No matter what has happened, he should beg her and I think his career will pick up again.”