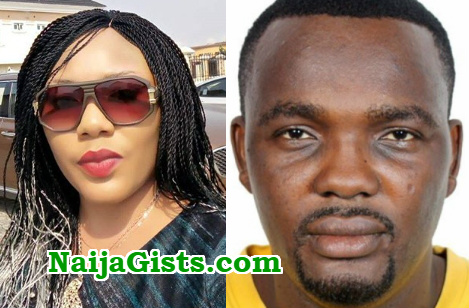 Nov 23, 2017 – Enny Gold: Yomi Fabiyi Demanded Sex For Movie Role From Me, He’s Bullying Me Because I Exposed Him

Enny Gold: Yomi Fabiyi Bullying Me For Rejecting His Sex For Movie Role Demand, I’ll Fight Him In Court

Eunice who called the actor a bully today told fans she will use everything within her power to fight him because she is 100% sure he is trying to silence her.

“Put a gun on my head! Nothing will make me change my word cos dat’s d truth. I never lied dat u raped me or physically abuse me, i only stated d fact about my encounter with u. So why placed a bounty on me? 20k 4 dat matter.

I never intended to even escalate this whole issue like this bcos its bygone but as u av placed a bounty on me and declared me wanted then i av to fight it till d end.

Next meeting at AIG office zone 2. Hope to see u. By d time we finish for court u go no whether i get evidence or not.  Nobody can intimidate me, i am ready to go to court if the need arises” 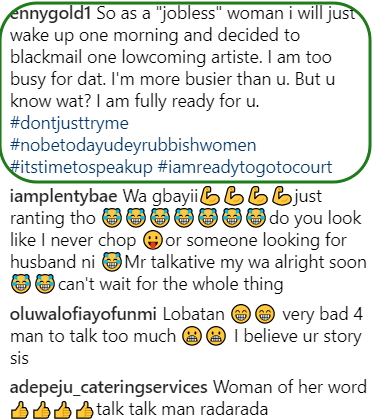 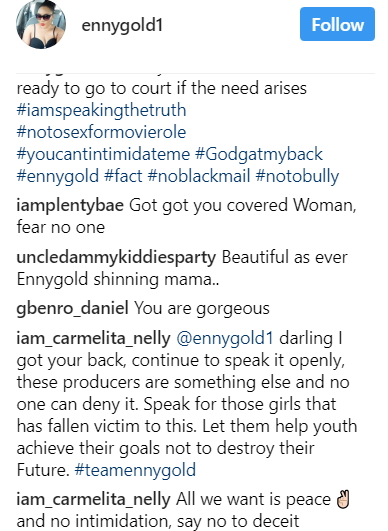 The two have been scheduled to meet at AIG office Zone 2 in Onikan Lagos.