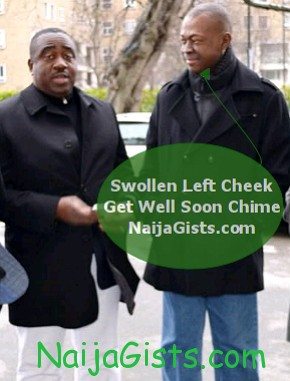 According to the latest report from London, the Governor of Enugu State Nigeria, Sullivan Chime has cancer. naijagists.com

Sahara reported that the ailing governor was diagnosed with Thyroid cancer in London last year, a condition that has developed into obvious swellings on his left cheek.

We learnt Governor Sullivan chime did 3 major surgeries to remove the affected parts in his Thyroid glands and lymph nodes.

He was unable to speak for several months, hence his mysterious disappearance from Enugu state.

A Sahara source in London revealed the following few hours ago:

“Although Mr. Chime has began speaking these days, his left cheek remains swollen, which accounted for the reason he hid his left cheek from in the group photograph with the visiting governors of Akwa Ibom, Benue, and Rivers during a visit to see him in London on Tuesday.

Governor Sullivan Chime is still very much alive. He is currently in another medical battle with Thyroid cancer that has spread to several parts of his body.

His colleagues paid him a courtesy visit in London earlier this week they have since returned to Nigeria.

May the Lord heal him.