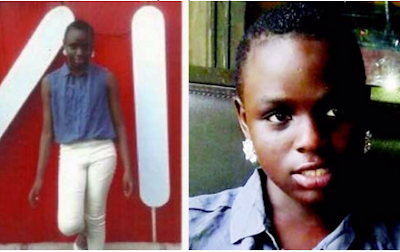 If Ese Oruru Return To Kano, Sharia Court Will Cut Her Fingers & In Prison Her – Emir Sanusi Lamido

The innocent girl kidnapped by a tricycle rider in Bayelsa State last year, Ese Oruru is on her way back home.

She reportedly left Kano amidst tight security few hours ago.

Her kidnapper on the other hand, Yunusa Yellow has been arrested by the police for sexual assault and abduction.

A lecturer at Bayero University, Professor Tosan Blessing took to his official FB page this morning to update Nigerians.

He said Ese confessed to him that Yunusa hypnotized her and forcefully converted her to Islam before he married her last year.

She was taken to Kano Central Police Station this morning and from there transported to an hospital for medical check up.

“She had said it was all the works of the Devil. She said she was converted to Islam and giving the name Aisha. I told her she is now being reconverted and her name of Ese is restored. She can’t speak Ijo but smarts Urhobo. I gave her some cold drinks and Zebadinne fresh yoghurt to cool the ehware tract and went back to my academic Duties. My names are Tosan Blessing Merhiakpome Harriman and that’s the way I see it.”

By the proclamation of the Emir of Kano Alhaji Lamido Sanusi Mai girma Sarkin Kano- Ese Oruru has been banished from the Kano Empire. If on her own she comes back to any part of the Kano Empire again in her life time, she may have chosen inadvertently to be the guest of the yandabas and Hisbas who may judicially profile her according to the Sharia and may be obliged as in this case to cut off her fingers- at least three from her left hand and imprisonment.

Ese Oruru Is A Born Again Christian, Yinusa Forced Her Convert To Islam – Onome Oruru
Photo: Man With Horn At His Back Spotted In Agege Lagos