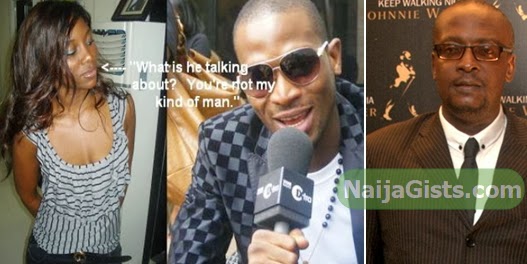 Read what Nollywood critics and movie producer said about Genevieve Nnaji‘s new endorsement deal with Etisalat and how it might affect her relationship with D’banj, a new Glo ambassador.

A couple of days ago, there was an excited buzz on social media in Nigeria that Nollywood actress, Genevieve Nnaji, has been signed on as one of the new Brand Ambassadors of Etisalat, a telecommunications company operating in Nigeria and sundry parts of the globe. Amid the congratulatory messages from her fans sent to her on some sites, a few cynical remarks caught my attention. (By the way, congrats Ms Nnaji!)

One commentator simply known as ‘Da Trut’ wrote in one of the comments section in a blog which I reproduce here;

‘Congrats, Genevieve. But wait o…your Boyfriend, D’Banj is a Glo Ambassador and now you are an Etisalat Ambassador. It has been reported that two of you will marry this year after being live-in-lovers and dating steadily for a while now. Since both of you have not denied this piece of news, I assume that it is true. With this new deal of yours, does it mean you cannot attend any show sponsored by Globacom in which D’Banj is a headliner despite him being your BF and you being expected to support your beau? And same goes for him too in any of your Etisalat sponsored shows? Won’t your relationship be strained by this?’

However nosy this comment may seem to some people, there is an underlying fact which many celebrities and of course the general public have overlooked when it comes to signing brand endorsements. Most of these contracts, if not all, are watertight for the artiste. The dos and don’ts imposed on the artistes could be argued in a civil rights court of law! But then, most artistes are quick to sign off the dotted lines basically because of the lump sum being paid to them by the competing brands. Which is all well and good too, depending on how you look at it.

And don’t get me wrong. I wholly commend all the brands cashing in on the perceived goodwill and traction many of these celebs have and investing in their art and to a large extent, the entertainment industry. These brands have uplifted the creative industries through such investments and the industry is the better for it. Really, it is.
However, a glaring reality is coming to the fore and many may laugh it off right now but it is staring at us in the face.

In 2013, many of the live events and sponsored concerts were tepid in performance value. Many of the top acts had been signed by one telecom brand or the other and since the headliners in the music industry have divided their brand endorsements among various telcos, many could not perform for friends or business concerns where a competing telco or brand was a major or support sponsor. This was basically because of watertight caveats in the artistes contracts which forbids them from attending such shows. Thus, most of the live concerts in 2014 in Nigeria were either lacking in major star power or just repititive in talents signed on by the brands. And the performance value of such events were basically average. Many of the brands which had campus shows suffered this fate.

In October 2013, the Nollywood Movies Awards held at the posh Intercontinental Hotel, in Lagos. Comedian Basketmouth had been hyped as the compere of the evening, supported by Dakore Akande. I was standing at the red carpet lobby, interacting with invited guests as we had cocktails when one of the organisers, Alfred Soroh, came up to me. He whispered to me that there was a problem and it had to be solved urgently. Apparently, immediately Basketmouth came out of the lift and saw a huge backdrop with Etisalat written on it, he quickly dashed back and refused to compere the show. His reason was that he was a Glo Ambassador and could not be seen on an Etisalat sponsored show. It makes sense. When I asked the organisers if they didn’t think it out before deciding on Basketmouth as the compere, they explained that Etisalat came in just a few days to the event. Segun Arinze, a tested and trusted hand, had to be drafted immediately to co-compere the event.
The example above is one of many others which are a usual occurrence. My gut feeling is this; the business will grow for the brands but the whole performance and event industry may very well suffer for this. For example, if a movie awards event had MTN as the major sponsor and 50% of the nominees are Glo Ambassadors, only an idiot would need explanations on why half the nominees would not be present at the awards even if they eventually won. Same goes for music awards events. This cycle is becoming predictable. And the performance value suffers for it.
But there may be those who would argue that the brands are capable of sponsoring their own events with only their brand ambassadors as headliners. I concur but for every show such brands sponsor, it becomes predictable. I would know that any MTN show would have Wizkid, KCee, Davido, Don Jazzy and other ambassadors as performers just as a Glo event would have MI, Bez, Lynnx, Omawunmi, Burna Boy, D’Banj etc as performers. Truth be told, when you watch them once, you have watched it all. Bring them up again in another sponsored show, even for free and many would reluctantly attend just as many would not. Performance value.
Brand Managers reading this may well snigger at this but I would advise that they meet with their counterparts in other companies suffering this same problem and iron out a few of these issues. Artistes must be free to attend other shows of competing brands as long as they don’t endorse the sponsoring brand nor endorse their own brand in such shows. Harmony is needed. The entertainment industry should not be cannon fodder for the corporate wars. In 2014, we all must enhance the performance value. (By the way, that phrase is my coinage and I think I like it.)
The artistes themselves must step up their game. There is too much emphasis on the cars they buy or the shoes they wear by their publicists, which is not bad by itself but it gets overdone and sometimes come out in bad taste. Artistes should be seen to be adding value to their lives and the society through more of personal social responsibility programmes rather than personal ‘I don buy am’ publicity stunts.

Granted, how they spend their money is entirely their business but the people out there don’t really know how they MAKE their money most times. And it’s not from shows or endorsements only as they are made to believe. Story for another day. What I am saying is; how many of these new generation artistes have impacted positively on the moral conscience and inspirational equity of the youths? Very few. In music, almost none.

In Nollywood, just a cosmetic impact. Story again for another day.
But I am not going to knock anyone in this write-up. I commend the dedicated efforts we all have put over the years to build the entertainment industry to this level. But the level is still in a pre-foundation stage.

The structures are lacking. As we like to say all the time ‘ but we will get there!’. Where ‘there’ is is as good your guess as mine.