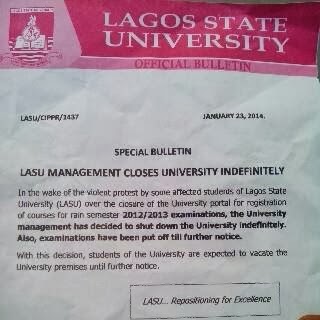 Hours after a violent riot that almost killed the Vice Chancellor of Lagos State Nigeria, Professor John Obafunwa, the school management has decided to close down until further notice.

The violent riot was caused by the Vice Chancellor’s harsh decision that prevented some students from registering for their second semester courses.

Meanwhile, I hear the VC sustained some injuries in the riot and he is currently receiving treatment at the hospital.

LASU management didn’t mention the name of the hospital for his safety.

See some photos from the LASU riot here.