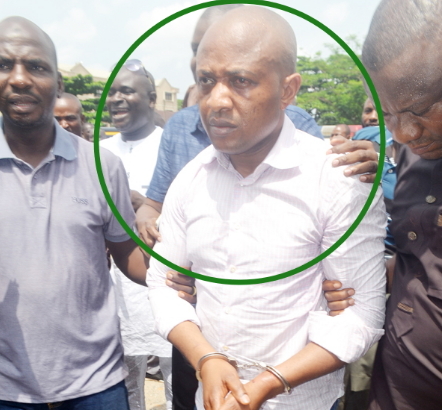 Evans who sued the police yesterday for keeping him in detention against his wish has filed a new lawsuit.

In the new suit with case number FHC/L/CS/1012/ 2017 filed today in Lagos, the notorious kidnapper who has killed many of his victims is claiming N300million in damages against the police for illegal detention and unconstitutional media trial.

He also gave police the option of releasing him unconditionally.

Evans claimed that his detention is illegal and is an infringement of his fundamental Human Rights.

The Billionaire kidnapper is also seeking an order of perpetual injunction, restraining the respondents from further arresting, detaining, harassing, investigating or inviting him in relation to the facts of his case.

Wonder shall never end in Naija o. A notorious kidnapper and armed robber is now claiming to have right….Can you imagine that…

Make we dey look as this Evans the kidnapper drama unfolds.

Continue Reading
You may also like...
Related Topics:evans the kidnapper, lagos, lawsuit, police