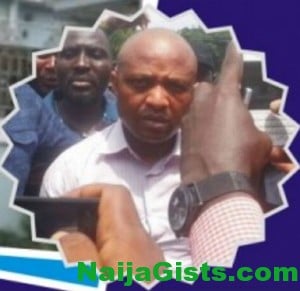 October 15, 2107 – Evans The Kidnapper: My Girlfiend Was Sexually Abused By Police Who Seized 29 Cars & N55Million From Him

Chukwudumeme Onwuamadike, a.k.a. Evans, the accused kidnap kingpin, has accused seven senior police officers and others on the Inspector-General of Police (IGP) Intelligence Response Team of extortion and sexual assault.

He alleged that the investigators forcibly obtained his cash in local and foreign currency, phones, wrist watches, jewellery, television, cars and trucks.

Evans also claimed that his girlfriend, Amaka Offor, “was roundly sexually molested and abused by the above policemen of the Inspector General of Police Intelligence Response Team.”

In an October 13, 2017 petition written on his behalf by his counsel, Mr. Olukoya Ogungbeje, he called for “appropriate sanctions and dismissal of the culpable police officers and policemen.”

The officers, according to him, include an Assistant Commissioner of Police (ACP) Abba Kyari, three Assistant Superintendents of Police (ASP) Phillip Rieninwa, Sunny Ubua and Emmanuel Ali and two police inspectors, Idowu Haruna and Egunjobi Segun.

He claimed that the policemen “forcefully and corruptly extorted” N50m from Evans, while his wife was also forced to part with another N5m.

A sum of $10,000 was also allegedly forcibly taken from him.

Evans also accused the police of taking away from his apartment, his 85-inch Samsung television set, worth N6.5m

Other items were 25 Mack trucks; a Lexus 470 jeep; a Grand Cherokee jeep; a L400 Mitsubishi Bus and a gold-colour Toyota Highlander jeep.

Apart from Kyari, the other police officers mentioned in the petition are Rieninwa, who was specifically accused of obtaining $10,000 from the kidnap suspect; Ubua; Ali; Haruna; Segun and “other policemen attached to the IGP Intelligence Response Team.”

The lawyer also alleged that Evans’ girlfriend, one Amaka Offor, “was roundly sexually molested and abused by the above policemen of the Inspector General of Police Intelligence Response Team.”

However, in a swift response, the police confirmed that certain items were taken from Evans but that they were all exhibits.

Kyari told The Nation that the police were unable to comment on each of the allegations because the matter is sub judice.

The petition was addressed to the Chairman of the Police Service Commission and copied to the National Assembly, the Inspector General of Police, the National Human Rights Commission, and Amnesty International.

Ogungbeje, who signed the petition, said: “It is very unfortunate that the above-named police officers and policemen could be involved in such gross misconduct and indiscipline in taking advantage of a criminal suspect in their custody to perpetrate high-level extortion, corruption, gross misconduct, indiscipline and sexual molestation.

“Sir, you would agree with us that these allegations are too weighty to be ignored by any right-thinking Nigerian. There is no gainsaying the fact that it calls for prompt investigation, inquiry and appropriate sanctions. We are using this medium as our own way of galvanising institutional sanity, cleansing and reform in the Nigeria Police Force as an institution.

“As we speak, the brother in law and other relations of our Client are still being detained and tortured by the Inspector General of Police Intelligence Response Team (IRT) without being arraigned before a Court of law.
“From the foregoing, we urge you, sir, to constitute a special investigation and enquiry panel to investigate this monumental extortion, corruption, gross misconduct, indiscipline, sexual abuse and Human rights violation against all the police officers and policemen of the Inspector-General of Police Intelligence Response Team.

“We also demand that you use the auspices of the Police Service Commission as an oversight agency of the Nigeria Police Force to invoke appropriate sanctions including dismissal against the culpable police officers and policemen.

“We have great confidence in your ability to deal with this matter no matter whose ox is gored.”

Last August, Evans pleaded guilty to two counts of conspiracy and kidnapping , and is currently at the Kirikiri Maximum Prison awaiting sentencing by an Ikeja High Court, Lagos.

Continue Reading
You may also like...
Related Topics:evans, girlfriend, kidnapper

Iyabo Ojo: No Love Without Money, I Don’t Fancy Poor Men Because I Don’t Want To Die In Poverty
1 Of 3 NDLEA Officers Murdered In Okene Kogi State, Ebun Peters For Burial