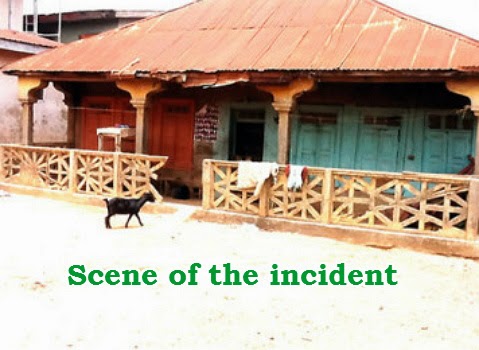 A middle age man has murdered his girlfriend of many years in Abaja compound,  Osogbo, the capital city of Osun state.

A resident who discovered the decomposing body of 19-year-old Bilikisu in a pit latrine toilet at the house pictured above alerted the police who immediately launched a manhunt for the suspect simply identified as Soji who is now at large..

According to eyewitnesses, Bilikisu was Soji’s girlfriend of over 2 years before her death.

Residents said they knew Bilikisu as Soji’s girlfriend and that the duo engaged in incessant fight often. They separated at a time and Bilikisu left Soji for several months but eventually, they resolved their last misunderstanding and Bilikusu returned to Soji’s house.

Few days after she returned to the house, she went missing, and Bilikisu’s parents while searching for their daughter visited Soji’s house and discovered that the man had absconded from the house.

Police Detectives from Osun State Police Command have removed the remains of the victim.