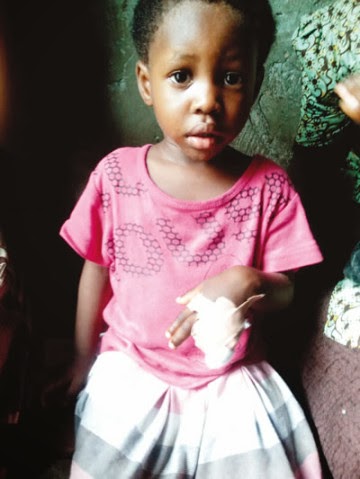 A 49-year-old Pastor identified as Moyo Martins was arraigned before a Yaba Chief Magistrate’s Court on Tuesday for allegedly cutting off the fingers of a two-year-old child, Saidat Faleye.

It was learnt that the mother of the victim, Mrs. Bola Faleye, had left her in the care of Martins on Thursday, when she wanted to take her bath.

After she was gone, the child and the suspect were said to have been together in his room.

About five minutes later, our correspondent gathered that the child suddenly let out a loud shriek of pain which drew the attention of neighbours.

They reportedly alerted her mother who equally rushed to the scene in panic. She found her child’s ring and little fingers chopped off.

It was alleged that Martins sawed off the fingers in his room.

The kid was said to have been rushed to a hospital within the area for treatment.

The suspect initially denied knowing anything about the incident. However, upon his arrest, he allegedly confessed that he did it in error and pleaded to be forgiven.

He was arraigned on one count, which reads, “That you, Moyo Martins, on March 6, 2014, about 1.10pm, at 5, Olumo Street, Iwaya Onike, Yaba, Lagos in the Yaba Magisterial District, did use sharp saw to cut off the left finger of one Saidat Faleye, aged 2 years.”

Continue Reading
You may also like...
Related Topics:cut off, fingers, girl, lagos, pastor