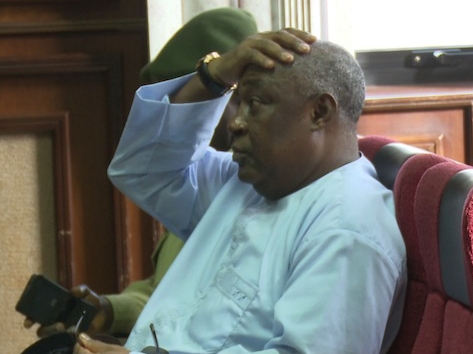 Justice Okon Abang of the Federal High Court sitting in Maitama, Abuja on Thursday, October 27, 2016 admitted another thirteen exhibits tendered before it by the Economic and Financial Crimes Commission, EFCC, in the ongoing trial of a former Chief of Defence Staff, Air Chief Marshall Alex Badeh (rtd).

Badeh is being prosecuted by the EFCC alongside his company, Iyalikam Nigeria Limited, for allegedly abusing his office by using the dollar equivalent of the sum of N1.4 billion (One Billion, Four Hundred Million Naira) removed from the accounts of the Nigerian Air Force, NAF, to purchase properties in choice areas of Abuja between January and December, 2013.

The offence contravenes Section 15 (2) (d) of the Money Laundering (Prohibition) Act, 2011 (as amended) and punishable under Section 15(3) of the same Act.

Counsel to EFCC, Rotimi Jacobs, SAN, led the seventh prosecution witness, PW7, Oluwatoyin Oke (a business woman); from whom the first defendant (Badeh) allegedly bought a choice property in the Wuse 2 area of Abuja in evidence.

The witness told the court that she used to own and live in No. 19, Kumasi Crescent, Wuse 2 Abuja also known as plot 456 Kumasi Crescent Wuse 2, until 2013 when she sold it for N260million.

Oke stated that after putting the property up for sale, she was contacted by one Abba Maidama who informed her of an interested buyer.

Upon inspection of the property, Maidama further informed her that his client was ready to commence payment in three installments.

The PW7 told the Court that the first installment she received was $550,000.00 (five hundred and fifty thousand United States dollars) which was paid into her account by the agent.

Upon receipt of the second and third installments of the dollar equivalent of N260million, Oke stated that she signed and handed over all the original documents and title deeds of the property, including a Power of attorney, Deed of Assignment and Deed of Sale to Maidama.

Prosecuting counsel now asked the witness to ascertain copies of the documents which were shown to her in court; and she did.

Thereafter, the documents were tendered and marked as exhibits D8 to D20 with no objection from lead defense counsel, Akin Olujimi, SAN.

Olujimi was called upon to cross-examine the witness to which he declined.

Justice Okon Abang, thereafter, adjourned to the November 2 and 3, 2016 for continuation of trial.