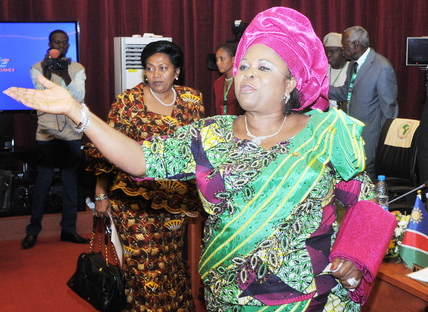 A Federal High Court in Lagos on Monday refused a request by Dame Patience Jonathan, seeking to unfreeze her accounts, having about 15.5 million dollars.

Justice Mohammed Idris ordered parties to file pleadings since issues had been joined as to the ownership of the money.

The judge held that all the defendants formulated different issues from those formulated by the plaintiff in the originating summons, saying it was unacceptable.

“The issues formulated by all the defendants are baseless. They amount to no issue and will be ignored by the court.

“I hold that this court lacks the competence to determine the issues raised by the defendants in their written addresses, having abandoned the specific issues formulated by the plaintiff in the originating summons.

“It is unfortunate. I say this because the issues raised by the defendants appear on the face of it, are good and deserving to be considered on their merit.

“But as I understand it to be the law, sentiment has no basis in the adjudicatory system.”

Idris said that where processes were not properly prepared, any defect would render the proceeding fatal as the court cannot “re-formulate” the issues for determination.

He held that there was a contention as to issues and facts in relation to the ownership of the money.

“In respect of this issue, the contention appears divided and there is clearly an air of friction in the proceedings.”

According to him, all the counter-affidavits filed by the defendants contain disputed facts that cannot be decided without oral evidence.

“In the light of the above affidavit evidence, it cannot in my view be rightly contended that there are no disputed facts or substance as to the ownership of the said funds and the law.

“The issues of fact raised by the defendants herein are not spurious or irrelevant. The affidavit of the plaintiff is also not conjectural.

“In my view, the facts are contentious and oral evidence needs to be led by the parties herein.

“In the light of the above facts, this case is generally not suitable for an originating summons procedure.

“In the circumstances, the court hereby orders that the parties herein file pleadings in accordance with the Federal High Court Civil Procedure Rules 2009.

“Trial shall then proceed accordingly. This is the order of the court,” Idris held.

Patience Jonathan had prayed the court to order the EFCC to unfreeze her Skye Bank accounts to enable her access the money.

On September 15, 2016, when they were arraigned, the companies, had through their representatives, pleaded guilty before Justice Babs Kuweumi, to laundering the money.

They were charged along with Dudafa, Amajuoyi Briggs and a banker, Adedamola Bolodeoku, for laundering the money.

Unlike the companies, Dudafa, Briggs and Bolodeoku pleaded not guilty to the 17-count charge.

In a supporting affidavit to Jonathan’s suit, deposed to by one Sammie Somiari, he said that Dudafa helped the former first lady to open the accounts.

The deponent had claimed that Jonathan was the sole signatory to the accounts and that she had no relationship with the companies.