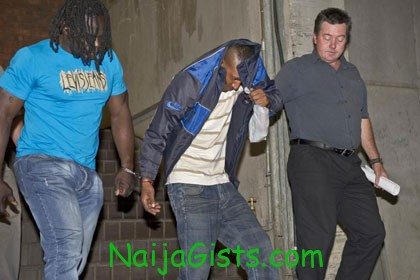 Former Nigerian Olympic athlete Ambrose Monye is one of Pretoria’s most dangerous men – the “go-to guy” if you want someone’s legs broken or need protection via his company, Big Dog Security. Earlier this month, former Nigerian Olympic athlete Ambrose Monye (in dreads) was acquitted of murder after beating a man to death. Now he is back behind bars in connection with the murder of young mother Chanelle Henning. Monye has long been on the police’s radar for his alleged involvement in drug dealing. But his latest brush with the law looks set to bring down the empire he has built over the past decade he is believed to have been in South Africa.

He competed at the 1988 Seoul Olympic Games in South Korea.

Security industry sources told the Sunday Times that the muscular strongman went nowhere without his burly bodyguards and struck fear in the hearts of those who crossed him. 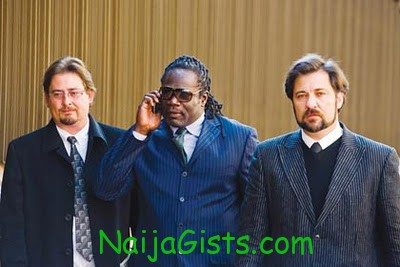 Ambrose Monye in the middle

It’s unclear when exactly he came to South Africa. He married a South African woman, Pontsho Khosholo, in 2001. Once a member of Tshwane’s Metro Police, Khosholo has since died.

Investigators involved in the Henning murder probe are now trying to piece together how Monye ended up in South Africa and acquired South African citizenship, and if it was all done legally.

One of the main issues is his age. His ID number suggests he is 37 – which means he would have participated in the Olympics at 14 – but it’s believed he is much older.

He is understood to own several properties, but not in his own name, and frequently travelled abroad.
He is described as aggressive and was acquitted on a charge of murder after beating a 48-year-old motorist, Neville Olivier, to death in 2009.

He successfully argued in court that he acted in self-defence against Olivier and his three friends.
One private investigator said Monye was known for having “a short fuse”, saying: “He once rented a property in Pretoria and, in a fit of rage, damaged the property extensively and ripped out the airconditioning system … he is as strong as a beast and very dangerous.”

Monye is registered under the Private Security Industry Regulatory Authority (PSIRA) as a Grade A officer – the highest possible qualification – meaning he can hold a directorship in a private security company.

While his company was meant to protect, he has had numerous brushes with the law. However, a number of assault and other cases against him seem to have gone nowhere.

A Pretoria-based private investigator said it proved “Ambrose bought himself protection in the police, [as] money was no object for this guy”.

Celebrity private investigator Mike Bolhuis described Monye as the “kingpin of Pretoria’s underworld”.
“While a lot of the usual suspects in Pretoria’s gangland have gone quiet over the past few years, Monye has simply gone from strength to strength. I know he has influence in the police and is untouchable,” said Bolhuis.

Monye admitted being a muscleman for his clients and, in a sworn affidavit in April this year, said he acted as “protection” for 1980s Afrikaans TV presenter Visser du Plessis.

Du Plessis is now a diamond dealer in Pretoria, and Monye claimed in his statement that he was once his personal debt collector and bodyguard.

Du Plessis scoffed at the claim this week, saying: “I’ve only met him once, five years ago, and never used his services. But I do know of his reputation.”

Controversial lawyer Peet Viljoen, who was recently struck from the roll because of fraud allegations, also admitted to knowing Monye.
He described him as “a very dangerous man”. (Source)