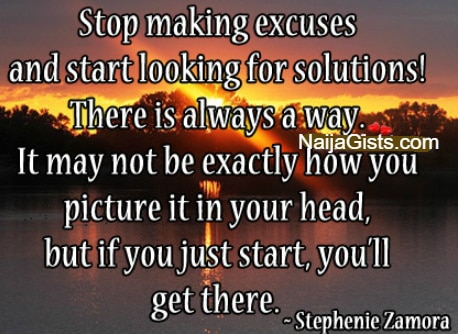 Most entrepreneurs don’t even make it past the first three months. They quit. Crazy, right?!

Not everyone in this world is cut out for owning their own business or reaching high levels of success. So what really makes the difference?

If you’re someone who defaults to making excuses, it’s time to shift your mindset. No successful leader or entrepreneur makes excuses for their inaction or action gone wrong, they make things happen regardless of the situation or circumstance.

Do you find yourself making excuses more than you’d like?

1. Leaders have defined their priorities.

Most people use excuses to avoid blame or self-defeat; usually for something they said they were going to do and then just didn’t. So now, not only have you not done what you said you were going to do, but you’re going to lie about the reason now too. Excuses are just lies wrapped up more neatly in reasons. The real reason was: it wasn’t a priority!

Exercise for example is a goal for many people, but because there is no short term need associated, we skip it, postpone it, make an excuse and try again next year. Unfortunately, you’ve been blinded to the long term benefits of your goal, because in the short term it’s easier to skip it.

Your priorities should also align with things you enjoy! Again, let’s take exercise for example, if your goal is to run a marathon, but you hate running, you might need to re-align or re-define the goal. Maybe the real goal was to become more fit, you should re-define the goal to include a fitness activity that you actually enjoy. If you enjoy the process of reaching the goal, the process will become a priority, and priorities get accomplished!

2. Leaders are not short-sighted.

Without a leadership mindset you’re thinking solely about the present — what you want (or don’t want) to do right now at this very moment. That’s where the excuse sneaks in. That’s why you hit the snooze button, or watch your favorite show instead of hitting the gym.

If you’re thinking like a leader, what you want (or don’t want) to do is presently irrelevant; it’s the end goal that matters. Does the thing you’re avoiding add value or get you closer to the end goal? If yes, then you should do it, regardless of your present desires. Instant gratification is for the weak at heart. Leaders are not shortsighted, so leaders know they will have to make sacrifices in the short-term for the opportunity to achieve the end result.

The way you do things that you say you want to do is…you just do them. You stay disciplined because you WANT the result of the work. Excuses are just a product of a lack of discipline, and discipline is just remembering what it is that you really want.

3. Leaders are not afraid to fail.

Leaders are comfortable with failure because they’ve seen it, felt it, lived it, and understand that it is just part of the overall process. Leaders are where they are because they’ve stayed disciplined through their failures. Failures even serve others by showing that making mistakes is part of life, and failures are not to be feared to a point of inaction.

Excuses are a way to avoid failures. If we let fear and vampire voices in, they tell us we can’t do reach our goal, and we make excuses to avoid, not the inevitable failure, but the idea of failure itself.

When leaders do fail (and they will) they do not make excuses, they do not blame others. Leaders know they have more to gain by admitting their mistake and moving forward to correct it than they do from dwelling, blaming and wasting time. Have you ever felt influenced or inspired by someone who made excuses and placed blame for something that was their responsibility? A leader who no one will follow is not a leader of anything at all.

Excuses don’t move us forward in the process. If we take responsibility for the inaction or the mistake, we’re able to correct it and proceed towards the goal. Leaders know that making excuses only delays the end goal and taking responsibility allows honest correction to take place in the process.

Your goals should be long-term, but you should develop shorter-term baby-step strategies to help you reach your long term goals. You need to break things down in way that shows you if you complete X, Y, and Z steps, you’ll reach the big goal!

Face failure head on. If you’ve failed, you’re one step closer to succeeding. Do not be afraid to try just because of the bumps along the way.

Be honest with yourself and others. Taking responsibility and understanding the real why behind the excuse will move you closer to achieving the end goal.

Continue Reading
You may also like...
Related Topics:excuses, people, successful