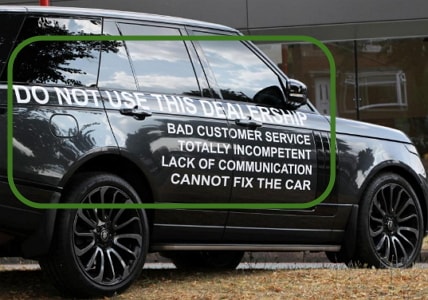 Check out how a furious soon to be dad registered his disappointment days after he purchased a £63,000 Range Rover from a car dealer in Birmingham UK.

The man who bought the black car as a gift for his pregnant wife said he was put on hold for 5.5 hours after he called to complain about air bags and engine oil leak problem he’s having with the car within days of purchase.

He said despite buying out a 3-year warranty on the car, the company did nothing to fix the problem.

He registered his displeasure by packing the car outside a Land Rover show room in Erdington, Birmingham.

The protest has since caught the attention of passerby who posted their thoughts on the social media.

Nigerian Soldier Killed In Makurdi Benue State: Army Officer Lured Out Of Hostel By Lady Found Dead
Benefits Of Daily Devotions & Bible Study: What You Are Missing When You Don’t Read Your Bible Everyday