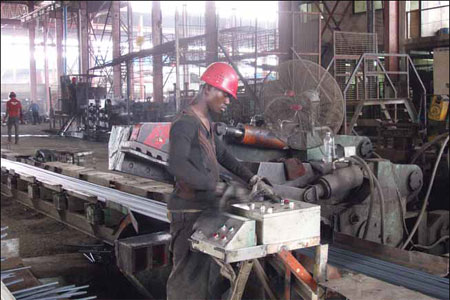 Emeka Umoh, a worker with Hongxing Steel Company Limited in the Amuwo Odofin area of Lagos State, was scalded to death after liquefied iron spilled on his body last Wednesday on duty.

He died at the Lagos University Teaching Hospital, where he was rushed to for treatment.

Another worker, Adebayo Ajiboye, was reportedly squeezed to death by a compressor sometime in February.

We learnt that there was almost a face-off between the management of the company and the workers, after the management decided to take the remains of the father of three to a morgue in a tipper.

Some workers in the Chinese firm, who spoke with our correspondent, said Umoh and Ajiboye were only two among many others who either died or sustained permanent disability while working with the company.

According to them, workers get involved in accidents on a regular basis due to faulty machines and the absence of safety standards.

Twenty-three-year old Obinna Eze, an indigene of Ebonyi State, who recently lost three fingers to a compressor, accused the management of the company of disregard for human lives. 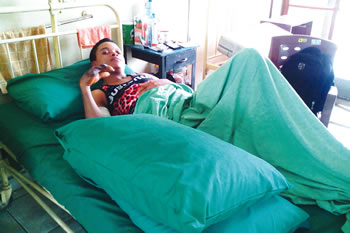 Eze, who spoke with our correspondent at the Federal Medical Centre, Ebute-Meta, where he was admitted to, said he had left Ebonyi State for Lagos in January 2015, to “hustle”, adding that he joined the steel company with high hopes.

He said, “We had to work through targets, which we call tonnage. Everyday, the amount of work you do is weighed on a scale, and you write your pay for the day down. Everything is summed up into what you collect every month. Sometimes I get N35, 000 every month, depending on how hard I work.

“I was among the workers operating the compressor, which we use to compress iron. On 10 August, around 5.50am, I was cleaning up the machine we had used to work overnight, when I noticed a crane heading in my direction. As I was trying to escape it, I never knew when my hand became trapped in the compressor.”

He said the machine chopped off three fingers, after which he was taken to the hospital.

“I am in pain right now. I have just started my life, but with this, I don’t know what to do again. I am confused,” he added.

Eze said there were regular accidents, which were usually caused by faulty machines.

He said, “Accidents happen from time to time. Workers sustain lifelong deformities like my own. Some people die. The reason is because when the machines are faulty and we call our bosses to repair them, they simply tell us to manage them.”

Our correspondent met with another worker of the company admitted in another hospital, who said he sustained a fracture after he was trapped by a machine in the company.

The worker, who spoke on condition of anonymity, alleged that the company management treated its Nigerian workers as slaves.

He said they were forced to work round the clock for a meager pay.

He said, “I have been working for more than one year, and yet, I have not been given an employment letter. The company does not have permanent factory workers and that is why they can fire us at any time.

“People die in the company like fowl and nothing happens about it. Ajiboye was my friend and he was very hungry that fateful day. He asked us for money to eat, but nobody gave him. He later bought biscuit and went back to work.

“A few minutes later, I heard a scream and by the time we rushed there, the compressor had crushed him to death.

“Our Chinese bosses brought a tipper and as they moved his remains into it, we started protesting. We were careful because we knew we could also lose our jobs.

“We did not allow them to take the corpse out in the tipper until they got an ambulance,” he said.

The worker alleged that some members of staff were sometimes beaten up by their Chinese bosses.

He said if any of the workers complained, the person was quickly fired and another employee hired.

“There is always a crowd of people at the gate, waiting to be called in. So, immediately you are sacked, they will go to the gate and handpick people to come in.

“These new people are first placed on training allowance of N650 per day and they could be on training for about six months before they are placed on salary. But nobody is a permanent staff.”

Another worker told Metro that people who worked in the “cook department” were the worst hit of all the workers in the company.

He said the workers were always exposed to hazards, which sometimes led to permanent injuries.

He said, “Just a few weeks back, liquid iron poured down the body of one of my friends and it peeled off half of his backside. Another person was blinded after the liquid affected his eyes.

“The recent case was that of Emeka, who died on Sunday, September 20, after the liquid iron spilled on his body. He was rushed to LUTH, where he died. There are many more who have become blinded and disabled.”

He said many of the workers could not resign because they had nowhere to turn to.

“There is no rest; we work from Monday to Sunday, including public holidays. We are suffering,” he added

A counsel with the Femi Falana Chambers, Ahmed Gbadamosi, condemned the alleged maltreatment of workers in the company.

Gbadamosi, who said he would be suing the firm for N30m as damages for Eze’s injury, said it was high time regulatory agencies investigated the activities of the company.

He said, “There is need to question the safety managers in that company because on a daily basis, they record different kinds of accidents, some of which lead to permanent disabilities.

“Some people lose their legs, arms and eyes; we will check them from our own end. We will ensure that relevant government regulatory bodies look into that place and check the standards they operate with. You don’t just allow people to die anyhow and most times, they don’t even compensate the victims.”