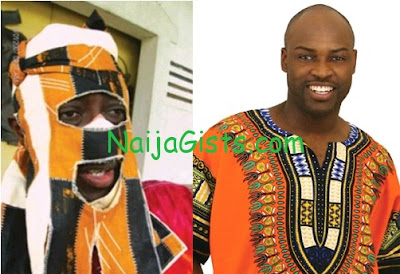 Nigerian high-life musician and a new Glo Ambassador, Bisade Ologunde aka Lagbaja is without doubt the best in his game.

Since he started his career, he has never revealed his real face (identity) to the outside world.

The picture above has become a subject of an intense debate on who the real man behind the mask is.

An anonymous source who visited NaijaGists.com today has revealed why Lagbaja never unmask his face.

Why Does Lagbaja Wear A Mask

In response to the above picture, here is what the source said;

This is not Lagbaja, I know him. Why are you even trying to unmask him? He has his reasons for wearing the mask. He used to be in the choir in one Baptist Church in Ilorin and his parents are prominent Baptist members. His family opposed his decision to sing that kind of music. They believed that he wanted to disgrace them because of their position in the church. That was why he put the mask. The Ologundes are from Ijagbo near Offa in Kwara State.

That mask is what makes him unique… Isn’t it?

His family’s opposition to his career choice might be a blessing in disguise.

What do you think?