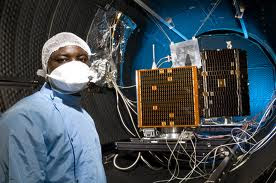 December 27, 2016 – Eyes Towards The Stars: Why Nigeria Should Invest In Space Science & Technology In 2017

…EYES TOWARDS THE STARS.
‘…the earth is the cradle of humanity, but mankind cannot stay in the cradle forever…’-Konstantin Tsiolkovsky

In the 2017 budget tagged ‘The Budget of Change’, N50B and N92B was allocated to education and UBEC respectively. Works, power and housing, rightly so some would say, got the lion’s share. While hoping for the success of this budget, if there is one thing I would personally like to see begin, starting from 2017, it will be a kind of turning of eyes as it were, government, stakeholders and well-meaning Nigerians alike, towards the stars, through an improved investment in Space Science and Technology education.

Since the dawn of civilization mankind has always credited his origin and final deliverance to God or the gods from beyond this planet. I believe this belief that our hope lay up there sits at the core of why mankind permanently gazes at the stars and never ceases to hope that salvation will one day come from above or for some, from ‘heaven’. In a literal sense, considering the situation on earth now, I think this line of thinking is correct.

For all of humanity, citizens of developed as well as developing nations alike, this imprint in all of us is not misplaced. This is why I think the time has come for Nigeria to begin to take Space Science and Technology education very seriously. Already, Nigeria is among the leading nations in Africa when it comes to issues of space based applications like environmental monitoring, satellite navigation and telecommunications. Still, we need improved investment in our Space Agency for real time space exploration. Although some may argue that we are not yet ready for this, I think there are a number of reasons why we should start now.

In 2013, a project known as MARS I was launched and began to solicit candidates from around the world for their proposed settlement plan on planet Mars. Over two hundred thousand people applied for the chance to be the first humans to colonize the red planet. Only twenty four would be selected and none of them are expected to return when the thing finally kicks off.

As we speak scientists around the world are currently testing models to create living quarters in Mars. NASA engineers for example are currently designing pads to be constructed remotely in Mars before humans arrive there. Once constructed, these habitats would supply water, oxygen and minimize harmful effects of atmospheric radiations to the humans that would be shipped there.

These are extra-ordinary achievements which buttresses the fact that we are now living in extra-ordinary times; times of stunning changes in social organization, economic well-being in some place -even though some other places are battling recession-, philosophical and religious perspectives -sometimes leading to horrendous terrorism- , as well as a new understanding of this vast universe in which we are imbedded like a grain of sand in a cosmic ocean. The realities of these vicissitudes have done much in keeping the minds and eyes of informed people around the world glued to headlines for news of what would happen next.

The size and the age of the cosmos are beyond ordinary human understanding, yes. In fact, compared to the universe, our planet is like a mote of dust in an early morning dew. Somewhere between immensity and eternity, our tiny spaceship –planet earth- has been set spinning in infinite space on an endless journey. Yet, it is in the sheer gigantic size of space and our smallness that the prospects of an endless possibility of gains abound.

Affecting life positively on earth, space exploration is changing human life in the area of security, communication, education, environmental awareness and so on, proving that the possibilities in space in itself are endless. This is why we are now seeing heavy investment in agencies like NASA, ESA, China, India, Japan, Russia and even South Africa space agencies.

Today, there seem to be a kind of unspoken urgency in the actions of these nations that proves that space is the future of man, that it is the frontier that man has yet to cross; the final frontier as it were. This renewed interest in space exploration is understandable and necessary if not urgent, for a number of reasons.

First off, we live in a dying planet with limited, yet fast depleting resources for that matter. Imagine the possibilities that will accrue to man the day we finally master and colonize space with the countless number of planets therein; a large part of it –this is with the optimism that higher civilizations in space will not wipe us out first.

As a matter of fact, there are those who believe if one world leader is taken every once in a while on a trip to space, and made to catch a glimpse of earth from there, without the political boundaries that most often cause strife among nations, they would see the planet the way it truly is -a fragile blue jewel- and the world would be better for it.

Words cannot emphasize the importance of space science and technology. Nigeria has a space agency that is up to the task and is already doing well. We can only ask the government to do more so that our space agency can become more than just a GIS and Remote Sensing application management agency. So that we can have a formidable space agency that can meet up to the National Space Research And Development Agency, NASRDA’s vision of putting a Nigerian in space come 2030.

On the global stage, among serious nations, in the coming years I believe we will see massive improvement in space exploration. The fact that private organization are already in the process of commercialization of space travels is testament to this. This is going to trigger a cascade of interest in space tourism and exploration. We have no choice today as a nation but to join the bandwagon, and begin to encourage our kids to take a first row seat in these coming years of space exploration so we can be part of the benefits that would accrue from such.

I am also sure the coming years would see lunar development and establishment of space habitats, a better understanding of space as seen from the perspective of space dwellers, of how to live, explore and mine resources. Man will eventually become space faring species and this doesn’t just include landing on the moon, we will eventually build actual civilization in space, like the British did in Africa when they colonized us. Space colonization, cities in the Moon and Mars, exploration of resources unheard of on earth, literal honey moons in the Moon, picnics to space and to distant stars and so on will eventually become common place and taken for granted by man.

Just like the site of ancient Babylon has today been reduced to ruins for archeological study, earth and her great monuments may become a place of scholastic experimentation in future. And just like today, we would eventually have children who’d one day say, ‘mom is from Mars, dad is from Saturn and I live in the Moon’. Despite the blabbing of religious men, if mankind does not destroy himself first, I believe this is where humanity is eventually headed.

This is why I believe that despite the fact that space exploration is one of the most challenging human endeavors, notwithstanding the fact that we are a developing country, we need to take the lead in Africa and begin to grow scientist for the next generation by encouraging more of our kids to take interest in space science. Government should, as a matter of urgency, launch a search in collaboration with agencies like NASRDA, which will immediately begin to seek out gifted kids through her numerous programs and begin to groom them. We must shun petty politics, tribalism and religious sentiments and build a very viable space agency and culture so that we will not only play a very active part in, but also profit from the coming age of space blessedness.

About the author: Albert Afeso Akanbi is a Novelist, Researcher and a Humanitarian. He is the author of three novels, a number of short stories and articles. He lives in Abuja, FCT, Nigeria and he is a father.
He tweets @afeso82 and share updates at BBM Channel PIN C004489A2

2 thoughts on “Eyes Towards The Stars: Why Nigeria Should Invest In Space Science & Technology In 2017”