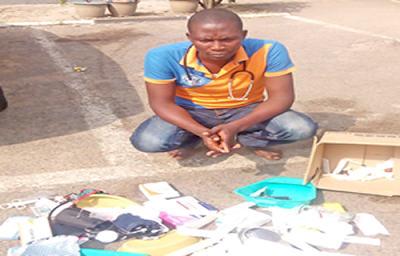 Dr Celestine Yolonfun, The Founder Of Be Well Hospital On Liverpool Road In Apapa Lagos Arrested After Death Of Pregnant Woman

The officials of Lagos State Police Command yesterday paraded an alleged fake doctor, Celestine Yolonfun, who was arrested in the Apapa area of the state.

Our correspondent gathered that 32-year-old Yolonfun had been practising as a doctor since 2005 after he dropped out of a nursing school in the Benin Republic.

We learnt that Yolonfun was arrested on Wednesday by operatives of the State Criminal Intelligence and Investigation Department, Yaba. 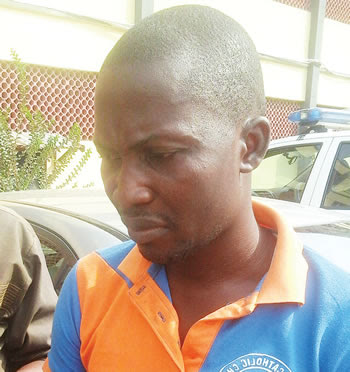 It was gathered that a pregnant woman, who was due for delivery, allegedly died in Yolonfun’s hospital, and her husband reported the doctor to the police at the SCIID.

Our correspondent was told that the police went to Yolonfun’s hospital – Be Well Hospital – on Liverpool Road, Apapa, and arrested him.

“I have been practising since 2005. I did not attend any school in Nigeria. I went to the Benin Republic. I sat for the General Certificate Education two years ago. I wanted to attend a university in Nigeria to study Medicine. But my wife fell sick and I could not.

“I dropped out of a nursing school in the Benin Republic. I came back to Nigeria in 2004, and I started the hospital in 2005.

“Since I started the hospital, which takes care of general ailments, only two persons had died in the hospital. The first patient died in 2013.

“The second patient was that woman who died penultimate Saturday. The woman was pregnant. She also had high blood pressure. After giving her the initial treatment, I planned to refer her to a bigger hospital, but she died before I could move her. Her baby also died.”