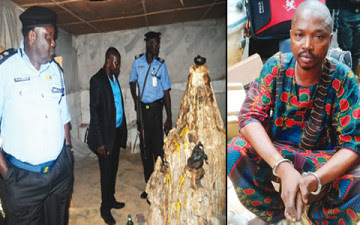 The Oyo State Police Command has discovered a place in a remote village of Ibadan, where thousands of fake pounds, euros, dollars and other foreign currencies were being produced.

The Commissioner of Police in the state, Mohammed Katsina, said that the discovery was made by the command’s ambush squad in a village called Ojoku in Badeku, Ona-Ara Local Government Area of the state. The police described the area as fast transforming to an abode for criminals, having earlier served as a kidnappers’ den.

Our correspondent, who visited the scene of the crime on Monday, discovered that the police had cordoned off the compound shielded by tall trees and thick bushes.

Apart from being a fake currency factory, the place also served as a shrine where several criminal activities were perpetrated.

There are two houses in the compound with at least six rooms adorned with various statues to give the impression that the place is being used as a shrine. The walls were decorated with the group’s description of gods to scare victims.

Ismail Adesina, 43, who was arrested at the scene, said he did not know anything about the currencies and that the owners had escaped.

He said he was a herbalist and that he had been involved in several financial crimes under the pretext of helping victims to cure ailments and barrenness.

Adesina added that the owners of the three vehicles were canvassers who combed the town to woo customers.

He said, “I am a herbalist and I inherited the skill from my father. I am also a conman. I cured diabetes, barrenness, blindness and other ailments. I have cured many people. My partner, who escaped yesterday, knows how the currencies were produced. Taju and Wasiu are my other partners. We have been here for about four years. We collected varying sums of money from our victims but we do not kidnap people. We bought the land in the bush and built the houses. I am a native of Beyerunka in Ibadan. The names of our victims are with my partners.”

Adesina said his wife had left him and taken his child away because he could not provide for them.

He added that he had bought a car from the proceeds of criminal activities but had to sell it. Asked if his father also taught him how to swindle people through fake healing, Adesina said that he was a genuine herbalist before he took to the crime.

The police said apart from taken money from their victims, the suspects also devised a way of gagging them by taking their nude pictures and threaten to release them if they failed to keep the secret.